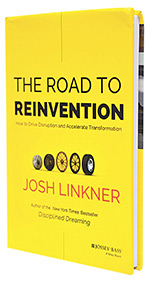 31 March, 2015
Print this article Font size -16+
It is a race out there. who disrupts first? Who gets the next great idea? Who differentiates better? Who makes technologies and processes redundant? And so, the sooner organisations and leaders adopt the right mindset on change and innovate and disrupt their current status quo in an original and relevant way, the better it is.

Josh Linker, in his book, The Road to Innovation: How to Drive Disruption and Accelerate Transformation, makes an important point about innovation and disruption being necessary not just in the product portfolio, but also in operations, the customer experience, organisational culture and customer segmentation itself.

Large global corporations often miss this. They get so caught up in managing their complexity that they miss what really matters for sustained success in a dynamic marketplace. They need to think small while being big.  Aiming for the bull’s eye always is not enough. Sometimes the target itself is the wrong one and needs to be redefined. Do companies and leaders always realise this before it gets too late?  Disrupt or be disrupted is the key theme of this book.

Linker goes beyond businesses or people or culture or even jargons such as “Change is the only constant” or “Only the paranoid survive”. Transforming your career, your perspective on life, enabling one to find one’s ‘true calling’ are his pet subjects. The author knows this best and has witnessed events first hand to write about them. He is a venture capitalist and, most importantly, the founding partner of Detroit Venture Partners, a company that is working towards rebuilding Detroit. The city, once famous for its auto industry and car manufacturing, filed the largest municipal bankruptcy in the US history in 2013. Last year, the city emerged from its crisis and is now in the process of  positive transformation.

It is this transformation that Linker is passionate about and goes on to say that in today’s dynamic world, it is not just our competition we need to watch, but the environment itself which is changing at breakneck speed —governments, geopolitics, terrorism, economic stability (or instability?), millenials, social media and what not. Can any individual or organisation that wants to have a future, remain static? If it does, Josh says, then the company is inviting sure failure and eventual demise! He points out that “grit” is the key characteristic of successful entrepreneurs — not something commonly known and often taken for granted.

There are 10 chapters in the book and each chapter ends with the tools for transformation which provide practical checklists and guides for action. The checklists provide executives with a ready reckoner for  doing a reality check and lead to an actionable list of answers.

I particularly found the last two chapters interesting as they focused on transforming one’s career and building a legacy. Caught in the daily grind, worrying about the month’s sales and bottom line, trying to get the loans paid off, and struggling to get seven hours sleep is how we spend most of our time. Linker urges us to take out 30 minutes periodically and do some blue ocean thinking as to where we are versus where we want to go.

With numerous examples and a dose of Detroit’s rise, fall and now re-invention, Linkner has kept the narrative really simple.He writes: “Reinvention is more than a good idea. It is essential practice.” After going through 224 pages of roadmap and spending a total of 11 hours on reading this book,  I am already thinking about what, when and how to change as well as how to reinvent.