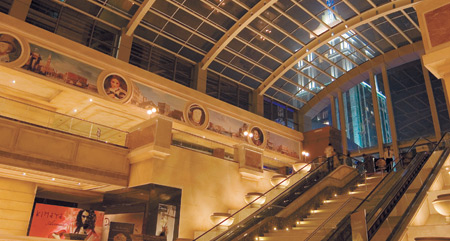 Thoughts of luxury shopping conjure up images of ‘high streets' in western markets that play host to the world's ultimate fashion brands. Places such as New York's Madison Avenue, Avenue Montaigne in Paris, Bond Street in London or Via Montenapoleone in Milan have become legendary for offering the luxury consumer a one-stop destination for all purchases. India, a nascent luxury market, has nothing remotely comparable. "We grossly lack the experience of luxury shopping," says Atul Mehrotra, co-founder of Evoluzione, a high-end store in Chennai. "You can't name a single place that is a ‘wow' shopping destination."

That is beginning to change now, with the opening of two luxury malls — DLF Emporio and The Collection — in Delhi and Bangalore, respectively. Global luxury brands present in India are moving beyond the limitations of five-star hotels (their abode so far) to these malls, creating an Indian version of a high street, only it's not a street, but the confines of a building.

Not that consumers mind. "I would not enjoy hotel hopping to look for different brands at different places," says Neha Kapoor, an occasional shopper of luxury products in Delhi. "With a mall housing all brands under one roof, it has become more convenient. I've come to buy brands I would only pick on trips abroad. But now with DKNY and Burberry under the same roof, shopping has definitely become fun." With an unending variety of stores and brands to choose from, luxury malls make eminent sense to the serious shopper.

"The essence of yesterday's bazaar or today's mall remains the same — providing consumers with an all encompassing experience," says Mohan Murjani of the Murjani Group, which has launched several international luxury brands such as Gucci and Jimmy Choo in India. Thanks to these two malls, global brands have found it easier to set up shop in the country, to the delight of the consumer. Be it an exclusive Hermes Birkin bag, a Jimmy Choo shoe every woman battles for, or a piece of Cartier jewellery, you needn't travel the world to splurge your hard-earned money.

And what of the experience? "I guess stores are pretty much uniform across the world," says actress Lara Dutta, who favours brands such as Cartier, Patek Philippe, Jimmy Choo, Louis Vuitton and Gucci. "In India, sometimes the new season pieces are not available unless by order. Prices too are on a par with international markets. The staff in India is better turned out, well-informed and keen to make a sale." Dutta now eagerly awaits the launch of brands such as Manolo Blahnik and Zara. The latter plans to reach the Indian market by 2010.

Not everyone is enamoured by the quality of India's luxury industry, though. "The Indian market is young and is developing too, whereas abroad retailing is a professionalised industry," says noted designer Ritu Beri. "They have totally mastered the skill of service and retailing."

At Vijay Mallya's UB City, the luxury retail space, The Collection, a joint venture of Prestige Group and UB City, is positioned as a high-end retail destination and caters to the discerning high-end market segment. With elements of Classic Tuscan architecture that create an aura of magnificence, it hosts many of the world's leading luxury brands such as Louis Vuitton, Canali, Ermenegildo Zegna, Stella McCartney, Paul Smith, Tod's, Burberry, Lanvin, Moschino, and Ferragamo, amongst many others.

Footfalls, of course, are much lower than regular malls. Since it's a luxury destination; the footfall is of niche clientele. "There is a larger turn out during the weekends, but they are generally for the Piazza, which houses various restaurants," says Prestige Group's spokesperson. "Serious shoppers visit The Collection during weekdays."

With monthly rentals ranging from an astronomical Rs 900-1,000 per sq ft, DLF Emporio in Delhi has opened its gates to the most exclusive brands from across the globe. The first Cartier boutique in the country is a gorgeous display of opulence. Stunning diamond-studded watches and exquisite jewels sit demurely as glittering lights make you want to reach out for them.

Similarly, the first Giorgio Armani Boutique and Emporio Armani store in India opened at the DLF Emporio mall last October. "It was important to present to the Indian customer the same collections that are on offer in most international and prestigious markets around the world," says a spokesperson of Giorgio Armani India. "We are now looking to expand our presence to Mumbai and beyond." Several other first-timers in India such as Judith Leiber, Harry Winston, Just Cavalli, Versace, Aigner,  Tiffany & Co, Van cleef and Arpels, and Bottega Veneta have opened stores in Emporio and The Collection.

Apart from the brands entering India for the first time, several existing stores have also either shifted base to these malls or opened additional outlets in them. One of them is Dunhill, which was launched in India in 2007 at The Shangri-la hotel, Delhi, and moved out in 2008 to Emporio and The Collection.

Others such as Salvatore Ferragamo, Jimmy Choo, Versace, Christian Dior, Tod's, Fendi, Louis Vuitton, Gucci and many more have also shifted focus to these luxury malls. "The shift from the hotels to malls has been quite helpful as now more international luxury brands are entering the Indian market," says Charu Sachdev of The Sachdev Group, which has brought to India brands such as Moschino, Jean Paul Gaultier and Stella McCartney, among others. "A brand has more choice in terms of its location as well as retail space".

Will there be a shift later from the malls to the streets, rather, to a high street? Not likely. "India lacks the infrastructure and the space for creation of a high-street market," says Kasliwal. "Due to various conditions — weather, traffic — malls are definitely a convenient option."

With inputs from Lalitha Sridhar