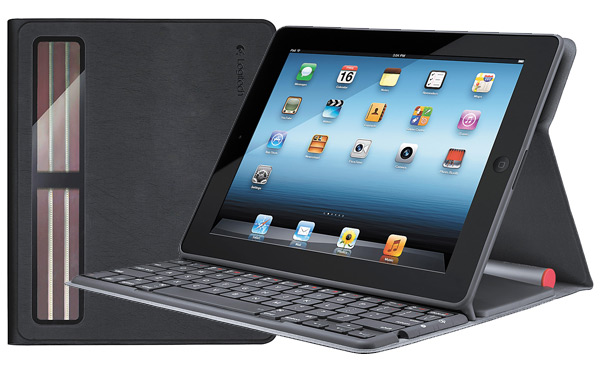 08 November, 2014
Print this article Font size -16+
One can’t help wonder why companies compromise on one thing to give you another. Logitech’s Solar Keyboard Folio for the iPad gives you a better typing experience than its cousin, the Ultrathin Keyboard Cover. But it doesn’t look as good — and it doesn’t seem tough enough to last long.
The Solar Folio, which pairs automatically with the iPad, uses sunlight to charge. But you don’t have to hang it out with the clothes. Charge it for six hours using daylight every four to six months and it’s good to go. How we wish other gadgets did something similar. However, I couldn’t test that as it has nothing to show how much it’s charged. For some reason, the solar panels are placed at the bottom of the case; it would have been better if they were exposed, as this would allow it to charge when you type in a well-lit place. But oh well.
The Solar Folio is made of a soft, plastic-rubber kind of material, perfect for travelling. The keys are well spaced for a smaller-than-normal keyboard which is something very rare. You have a choice of two angles on this keyboard: a regular typing one, and when the top slips across the keyboard but settles in just before the first row of keys.
This isn’t an all-situations keyboard. You might have to buy another case for using the iPad to read, draw, play games and take pictures or if you use it heavily for typing. That’s quite a problem as the Solar Folio costs a staggering Rs 8,990. You could buy a whole low-cost tablet for that amount.
Smooth-Backed Beauty
Let’s talk design. Because that may be the best thing about the Sony Xperia Ion. You’ll first notice this handset’s back — gorgeous, much like some smooth-skinned model wearing a practically backless dress. It’s curved and silky to the touch and rounds nicely at the edges. Not the model, the phone. The back is a brushed aluminum satin red. A subtle, soft rubber section opens to let in the micro Sim and memory card. On the curved edges of the phone are the finessed buttons — including a camera-dedicated button and a pull-out flap that takes the cables.
Now flip over the phone and you see a contrasting front — all clean-cut sharp lines and glossy glass (and yes, that part loves fingerprints) in an interesting mix. It is a good looking, slim phone with just the right amount of heaviness. I found the 4.55-inch screen display too white and the colours not vivid enough. Text is clear, but not as pleasing as it is on, say, the HTC One X or S.

Resolution is 1280 x 720 pixels and it has got Sony’s Reality Display with Mobile BRAVIA® Engine, which is what is supposed to enhance the display. The Ion was shipped with Android 2.3 when it was launched but now has 4.0.4.
The camera is a 12MP one with LED flash, 16x digital zoom and autofocus but no stabilisation. The camera does 1080p HD video recording. The face-facing one is 1.3MP. The soft keys for navigation are annoying; they are awkwardly placed, don’t light up helpfully and are on top where you’d think to press.  The Ion runs on a 1.5 GHz Qualcomm Dual Core processor with 1GB RAM, and 16GB of onboard storage. Running some tests on it, I found it doesn’t perform badly, but not that brilliantly too for Rs 36,999; at that price you can get get a  Galaxy S3 or HTC One X. The Ion, however, isn’t in the same league, with less powerful specs all around.
A Sleek Spectre
Ah, the glint of metal. It can win me over any time just as much as delicate floaty lace can. When you take the HP Envy SpectreXT out of its packaging, you can’t help stopping for a moment to admire its looks. It’s all brushed and textured metal with rounded corners and skirting that sparkle just enough to tantalise. Unlike the first HP Spectre, which was all gloss and glass, this 13.5-inch Ultrabook is metal with a sensuality. It has one of the best keyboards I’ve used recently. It is backlit.

The touchpad, which you can turn off, is good and depresses with a good click, leaving you in no doubt that you pressed it, unlike others on some laptops where there isn’t enough feedback. There are HDMI, Ethernet, and USB ports in the usual places.
What doesn’t feel so good is the framing around the 13.3-inch screen. It feels plasticky and ill-fitted. The screen is bright, and has good colours. The SpectreXT boasts of Beats audio and the sound is loud though a little treble-ish.
It runs on a dual-core 1.7GHz Core i5-3317U processor, with 4GB of memory, 128GB of storage and integrated Intel HD 4000 graphics. Battery life is about seven hours. For Rs 64,990 and so premium a look and nothing particularly wrong with it, it’s good value for money.