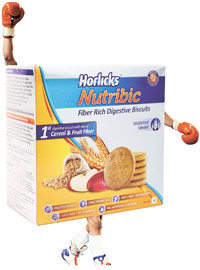 08 November, 2014
Print this article Font size -16+
In the brands business, imitation is anything but the sincerest form of flattery. Ask GlaxoSmithKline Consumer Healthcare (GSKCH) or Videocon Industries. These companies came out at different ends of legal battles on trademark and design copyright law in recent weeks.
Let’s start with GSKCH. On 12 October, GSKCH launched the Horlicks Nutribic across key markets in six states of the country. What would have been just another product launch was prefaced by intense courtroom drama that the brand was  subject to for the last couple of months.
Here’s the story: this August, Britannia Industries sued GSKCH, which owns the Horlicks brand, for trademark and copyright violations of Britannia’s NutriChoice biscuits, also a digestive biscuit. In a suit filed in the Madras High Court, Britannia said that GSKCH’s new Horlicks Nutribic, test-launched on 20 August in Chennai, was a copy of its NutriChoice Oats biscuit.
Britannia approached the high court, with a stay application restraining GSKCH from passing off its Nutribic biscuits using the trade garb of NutriChoice Oats biscuits and also infringing its own registered trademark NUTRIBIX.
It argued that Horlicks Nutribic had adopted similar packaging style, colour scheme, etc., to ride on NutriChoice’s reputation built over 13 years. The court passed an interim order restraining GSKCH from making, selling and advertising the Horlicks Nutribic brand with packaging similar to NutriChoice biscuits, as well as using the Nutribic trade name.
The judgement was ex parte (i.e., without hearing GSK’s side), so GSKCH filed an appeal. On 24 September, the Madras High Court allowed GSKCH to restart the marketing and distribution of Horlicks Nutribic. A GSKCH statement says “the company adopted Horlicks Nutribic mark honestly and the registration of Britannia’s Nutribix since 1999 without any bona fide use for the last 13 years could not prevent any person from using any similar mark like Nutribic”.
If Looks Could Kill
Videocon Industries did not fare as well as GSKCH, though. In June, white goods firm Whirlpool noticed that Pebble, a washing machine from rival Videocon, was very similar in design, shape and configuration to Ace, one of its best-selling models in India. Whirlpool claimed it had already sold around 300,000 units of Ace since its launch a year and a half back, before the Videocon product hit stores.
So it dragged Videocon to court, alleging that it had infringed the design deliberately to take advantage of Ace’s popularity. Videocon was also accused of selling Pebble at a lower price, thus hurting Whirlpool’s sales. The initial round went in favour of Whirlpool, but Videocon filed an appeal in the Bombay High Court.
Videocon contended that when Whirlpool had registered two designs with minimal differences, both could not be original. But, if Whirlpool could register two designs
of the product with almost no difference, why couldn’t Videocon register or market Pebble as a third design, which was different to both of Whirlpool’s designs.
But the argument was rejected based on Section 6 of the Design Act, which says that a single party seeking registration of similar designs is vastly different from two parties seeking registrations on similar designs. “This was a judgement that decided a substantial question of law,” says Manish Saurastri, partner, Krishna and Saurastri, a Mumbai-based IPR firm that represented Whirlpool.
In August, the Bombay High Court dismissed Videocon’s appeal against an injunction restraining it from marketing Pebble. Using the judged “solely by eye” methodology — used to test design violations — the court ruled that Pebble was an imitation of Whirlpool’s Ace.
Videocon chairman Venugopal Dhoot, however, says his company will appeal against the verdict “as a matter of principle”.
Despite the quick relief in both cases, we are unlikely to hear about multi-million dollar damages being awarded in India to the aggrieved parties anytime soon. As the law on computing and awarding damages for design infringements is very weak, at best firms get injunctions to prevent further damage. Damages, if any, are awarded only at the stage of the final hearing.
Typically, it takes about eight years for a case to reach the final stage, say legal experts. “To avoid a prolonged legal battle, most parties prefer to settle it in the interim stage,”says Adheesh Nargolkar, principal associate, IP, with Khaitan & Co., who has himself been involved in the settlement of several disputes in recent times.
But experts suggest that Indian law still needs to be made stronger and be developed further. For instance, India still does not have a comprehensive law to protect utilities. In the case of Apple versus Samsung, the iPhone’s pinch-to-zoom and tap features were evaluated under the utility patents. In India, such disputes will currently fall under the technology patent regulations. Many countries have separate utility model protection laws.
The Apple-Samsung verdict has only made everyone sit up and take a good look at their design assets. “If design is distinguishing enough to be a game-changer, then it must be protected at all costs,” says a Whirlpool executive. That’s a statement no one will dispute.