Desi Is The New Cool 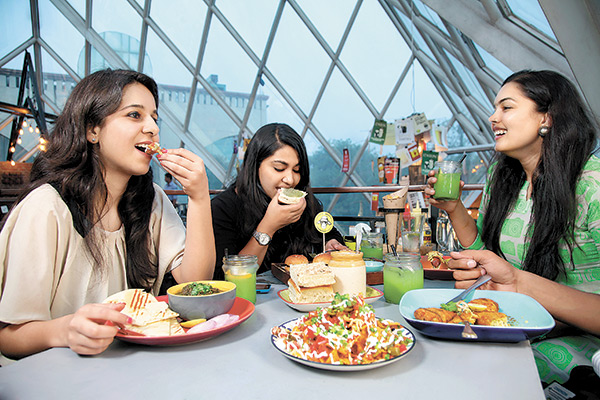 08 November, 2014
Print this article Font size -16+
At zambar on the Moon, the cosy new café at the Moon River design store in Delhi’s leafy Defence Colony, chef Arun Kumar sends out a plate of stylised mini idlis with some killer chutneys. There’s a first-rate coconut concoction, a powerful ginger one and finally the green coriander with garlic and fresh coconut, all ground together in a burst of flavour. The coriander chutney sends Pawan Hora, a successful marketing entrepreneur in his 30s dining with me that day, into foodie ecstasy. “You know, at home, I am the go-to man for all chutneys. I pluck the greens from my garden, wash them myself and grind them on our stone sil,” he says. “That’s the only way to get real flavour.”

You may associate grinding stones more with grandmothers and Hora may sound somewhat like a chutney Nazi, but he is hardly alone in his quest for “real, traditional flavours”. Traverse metropolitan India’s foodie universe and you are likely to stumble upon a startling trend: It is suddenly fashionable to dabble in and consume “authenticated” pan-Indian flavours. Desi is cool like never before.

Indian food, or at least the restaurant-created Indian food, has always been a bestseller, offering maximum return on investment. But for diners, whatever comfort they have sought in their biryani, butter chicken or Udupi-style dosa, it has hardly been trendy. In the upwardly-mobile Metro pockets, going out with friends, on dates, with business associates invariably meant that you trawled reviews for “international” experiences. Until now.

In a reversal of how tastes ran for years prior, chefs and restaurateurs are now discovering that authentic regional flavours, served stylishly, can woo even fickle, younger diners frequenting upscale cafes and bars. This clientele is not only different from what the “family” diners attracts but also from the older, more sophisticated audience of, say, an Indian Accent, the country’s most popular contemporary Indian restaurant.

While the last two-three years may have seen an increased interest in regional Indian cuisines and mom-and-pop restaurants set up by passionate individuals dishing out everything from Bihari to Oriya, the definitive moment that catapulted pan-Indian to its “cool” status was probably the explosion of Bangalore’s Monkey Bar on to our foodscape about a year-and-a half ago (it has since added another outlet in Bangalore, one in Delhi and is set to go to Mumbai).

The country’s first gastro-pub — and perhaps still its only one, though there are many followers — Monkey Bar took an interesting route, pushing the envelope, putting the likes of dabeli and vada pao, Tikki of Joy (Calcutta-inspired bhetki cutlets), Coorg-style pandi curry (served with pita) and Shaami Sliders (only in the Delhi outlet) on its refreshing, playful menu with serious gourmet credentials nevertheless. For diners bored of regular bar menus, this made for an instant “wow”. I remember, walking in on a cool Bangalore night and gorging on the beef-with-ker sangri “pickle”, presented in a quirky martban. Who would have thought that the desert berry, usually to be found in an oily Marwari thali, would have made so much sense in an energetic pub?

The gastro-pub phenomenon is an old British one. And when chef Manu Chandra and Chetan Rampal, partners at Monkey Bar, discussed it initially, one of the ideas suggested to them was that they replicate the British concept. Sensibly, they decided not to, creating a space for the young Indian, who is cosmopolitan, well-travelled yet quintessentially desi at heart. The food (and drink) is presented quirkily enough to appeal to younger sensibilities but the real success also lies in the level of detailing. Open up the vada pao and you still see/taste the exact garlic-chilli chutney of Mumbai’s streets on the pao.

Luckily, there are other young chefs with similar sensibilities experimenting. In Delhi, last winter, one of the biggest successes was not one of your fancy, over-budgeted restaurants. Instead, like a sleeper hit, Café Lota at Crafts Museum, stole upon us quiet unsuspectingly; its reputation built entirely through word-of-mouth and the social media, and packed in full houses, night after night.

Rahul Dua, its young chef and partner, was the head sommelier at Dubai’s Gordon Ramsay restaurant, till he decided to come back. “I only started cooking two years ago though I was in the F&B industry,” he says. Café Lota was somewhat of an experiment; Dua’s strong pan-Indian flavours (there are a lot of Kumaoni specials since many of his cooks are from that region), presented in a contemporary manner, that he feels has been the key to changing perceptions. What Dua has also done is bring in his own philosophy on food—focussing on seasonal veggies, on traditional grains, and playing on childhood memories—on to the plate. The fish and chips at the restaurant, for instance, is Amritsari machchi, crusted with amaranth (ramdana) presented with sweet potato (shakarkandi) frys on the side. With its top quality food and low prices, the café has pulled in young Delhi foodies.

Zorawar Kalra, managing restaurant at Massive Restaurants, whose contemporary Indian restaurant brand Masala Library in Mumbai has been very well received (it is going to Dubai now and does a business of 400 diners a day, at an average price of Rs 1,500-1,800, says Kalra), feels that Indian food turning “cool” has a lot to do with marketing and presentation. “We are going to do cool things even with butter chicken”, says Kalra, who recently launched his chain of Farzi Cafes, Indian cafes with gourmet food, targeted at a younger set.

Indian flavours are so trendy that international food and drink experiences are picking up accents. Mumbai’s Sassy Spoon does European food with Indian flavours — Maharashtrian thecha in pumpkin salad, Molagapodi crusted scallops, etc. And even at Delhi’s Le Meridien, the “Sparkling” range of cocktails at the bar sees innovation. I had a chic glass of prosecco here with the glass rimmed with Indian spices (a blend of cloves, cinnamon, black pepper). And it is possible to sip on some creamy Amarula (from South Africa) enhanced with black pepper or a heady mix of gin, Jagermeister, tonic and cucumber.

At the other end of the spectrum, 27-year-old Megha Tuli has a startup in Gurgaon called the Leaping Caravan. A six-month-old home delivery service, it offers a compact menu of family recipes from the Grand Trunk Road. From the Railway Chicken Curry to the Bulandshari Kebab, each dish has a story, and there are simple meals like ghee-shakkar-roti from Tuli’s childhood. “Our entire attempt was to appeal to the young. We did this with our branding, the way our website is done and all our communications,” says Tuli. Leaping Caravan already has its following. But few know the really interesting bit: Brought up abroad, Tuli did not grow up on Indian food at all! It’s an acquired taste. And a cool one at that.