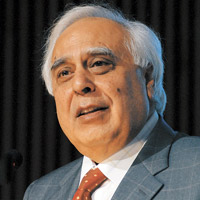 The Human Resource Development (HRD) ministry’s 11-page affidavit in the Supreme Court (SC) on Monday stating that a four-member review committee had recommended derecognition for 44 of India’s 130 central universities could have done with some transparency. For, neither the institutes nor the students had any inkling of the impen-ding doom.

Member of the committee, Goverdhan Mehta, says: “Our job was to give our view.... It is for the ministry to decide what it wants to do now.”
On the sidelines of a press conference, HRD minister Kapil Sibal refused to respond to BW’s questions saying the matter is sub judice.
The court has set 25 January as the next date of hearing. But before that, the ministry could perhaps make the report public. Sibal’s explanation that the ministry did not make the report public because it was still deciding its next course of action defies logic. If the ministry was not ready, it could have sought more time. SC advocate Prashant Bhushan says, “The government would have been within its rights to seek more time to submit the report.”
Though the ministry’s attempt to stem the rot is commendable, the lack of transparency in the entire exercise is appalling.
(This story was published in Businessworld Issue Dated 01-02-2010)
Tags assigned to this article:
magazine education kapil sibal shalini s sharma hrd