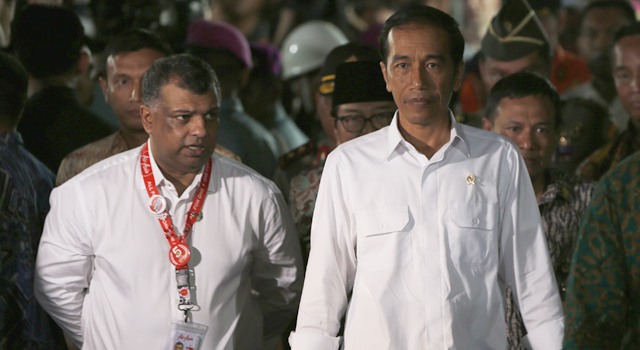 14 January, 2015
Print this article Font size -16+
After three days of intense search, at least 40 bloated bodies and debris of the missing AirAsia aircraft carrying 162 people were found on Tuesday (30 December) in the Java Sea off Indonesia but mystery remained over the cause of the crash.

The Indonesian navy reported that 40 bodies had been retrieved by one warship and rescuers were continuing to recover more bodies and were "very busy now".

The bodies were spotted along with debris floating in the Java Sea off the Indonesian part of Borneo, close to the area where contact was lost with the aircraft on Sunday morning.

Relatives of the 162 people on board the ill-fated plane hugged each other and burst into tears in Surabaya from where the plane had taken off for Singapore as they watched television footage of bodies floating in the sea.

"It has been confirmed that it is debris from an aircraft bearing red and white colours," Djoko said, citing that the debris was found by the ministry's rescue team.

Search and rescue operations are on in the area in coordination with Basarnas (Indonesia's National Search and Rescue Agency), he said.

Earlier, an Indonesian air force plane spotted a "shadow" on the seabed believed to be that of the Airbus A320-200, Indonesia's National Search and Rescue Agency chief Bambang Soelistyo told reporters.

"God blessed us today. At 12:50 the air force Hercules found an object described as a shadow at the bottom of the sea in the form of a plane," he said.

AirAsia CEO Tony Fernandes, who is an ethnic Indian, tweeted to the families of the victims: "My heart is filled with sadness for all the families involved in QZ 8501. On behalf of AirAsia my condolences."

Search chief Soelistyo said all efforts were now being concentrated on the location where the "shadow" and debris have been found.

The plane was carrying 155 passengers -- one British, one Malaysian, one Singaporean, three South Koreans, 149 Indonesians -- and seven crew members -- six Indonesians and a French co-pilot.

Seventeen of the passengers were children. There were no Indian nationals on board.

10 Pieces Of Debris Found
Ten pieces of debris were found during the search today for the ill-fated AirAsia Indonesia.

"We just searched (the location) until 11 am. So, according to estimations, the debris was seen at 10:15 am (local time)," Yusuf told reporters.

The location of the debris matched information from two fishermen in Pangkalan Bun who said that they heard a thud and saw explosions on Sunday morning, he was quoted as saying by the Jakarta Post.

During a news conference by the head of the operation Soelistyo, shown live on Indonesian TV, pictures of the debris were shown including a body floating on the water. Relatives of passengers on the plane watching the pictures were visibly shocked.

All resources were now being sent to the area where the debris was found, and all objects or bodies found would be taken to Pangkalan Bun, Soelistyo said, referring to a nearby town in Central Kalimantan province.

Soelistyo said that ships with more sophisticated technology were being deployed to check whether larger parts of the plane were submerged beneath the debris.

At least 30 ships, 15 aircraft and seven helicopters had joined the search for the AirAsia flight that went missing on Sunday morning after taking off from Surabaya in eastern Java on its way to Singapore.

The multinational operation, led by Indonesia, was joined by Malaysia, Singapore and Australia, with other offers for help from countries like India, South Korea, China and France. The US destroyer USS Sampson was also on its way to the zone as the discovery was found.

Earlier, several sightings, including something that resembled oil spill east of Belitung island, turned out to be false alarms.

The search by Indonesian Air Force planes spotted two pools of possible oil slick yesterday but these were later determined to be shadows from underwater coral.