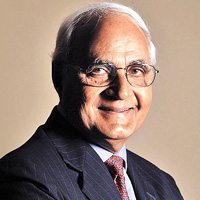 DLF is, however, strengthening and consolidating its commercial leasing business. The company's leasing volume stood at 1.62 msf during the third quarter of 2010-11 against 1.56 msf in the previous quarter. Its total lease portfolio stands at 22.39 msf. The company had 56 msf of projects area under construction at the end of the quarter.

Experts, however, believe that a lot will change over the next few months. Pranay Vakil, chairman, Knight Frank (India) says, "There has been a shift to the mid-income group, which comprises 65-70 per cent of the volume in terms of units. DLF is exploiting land resources and it can utilise large chunks of land for developing residential colonies for mid-income groups. Also, unlike luxury homes, mid-income houses can be developed in tier-II cities as well. However, equations will change in the sector as many loans will fall due in March that were taken in the past two years. This will create a lot of pressure to sell." Vakil also hinted at a rise in bank interest rates and how a weakening dollar might lead to lesser sales (NRIs might not find it profitable to invest in residential properties in India any more).

One irritant in front of the real estate giant is its huge debt volume. The company has dropped its plan to sell the wind energy business, for which it reportedly had an offer worth around Rs 1,000 crore. It plans to cut its debt, majority of which will be from the sale of non-core assets and refunds from various government authorities in the next one year. The company also hopes to get a refund of Rs 800 crore from the Delhi Development Authority in lieu of a planned convention centre project in Dwarka in Delhi, which was subsequently scrapped. It is also selling portions of its land bank to improve its debt position.

However, all the selling is done through DAL (DLF Assets), a subsidiary company, as DLF doesn't do direct selling to customers. So, it books profits by selling the product through DAL, which is not listed, and the negative impact is absorbed by DAL.

Experts are optimistic about the company's attempts to stabilise, though they have doubts about DLF's sales volumes. "In the short run there are some issues, particularly the huge debt. And though residential volumes and leasing volumes have been good, the target of selling 12 msf of space in the current financial year seems to be a big challenge for the company and will definitely be difficult to achieve," says Param Desai, analyst at Angel Broking. He, however, added that the company's strong land bank and quality of construction are good for long-term growth.

Also, the giant builder might miss its launch targets. The company had targeted to sell 12 msf of space in FY11, but during the third quarter DLF launched only 1.8 million sq. ft of projects. the company earlier hinted at delay in getting approvals behind slowing down of the new launches. It launched plotted developments, (Almeda-Phase I) spread across 100 acres in Sector 73, Gurgaon and sold 2 million sq. ft of plots during the same period.

DLF seems to be making its moves very cautiously. It is expanding and at the same time exercising restrictions. With the real estate market still showing no signs of turning around soon, DLF indeed has a tough road ahead. The company in the next fiscal will have to speed up its launches and sell its non-core assets at a reasonable value in order to fight back. However, with new strategies and a pan-India presence, it would do well to hang on to its core strengths. (Despite repeated attempts, DLF could not be reached for comment.)