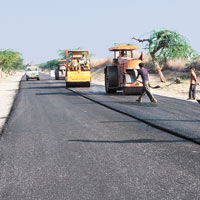 08 November, 2014
Print this article Font size -16+
With an aim of fastracking infrastructure development, the Prime Minister's Office has set deadlines for steps to implement key projects covering sectors like railways, highways and power.

The deadlines were earmarked at the first meeting of the steering group appointed by Prime Minister Manmohan Singh to accelerate infrastructure investment.

The Principal Secretary to Prime Minister has directed all ministries/departments to nominate a nodal officer each, of the rank of a Joint Secretary or above, who will report on a weekly basis on the progress of their department's projects.

Contracts for the construction of 17 identified projects will be awarded between September 2013 and March 2014.

Those to be awarded in 2013 include Eastern Peripheral Expressway, Eastern Region transmission strengthening VI and VII, Southern system strengthening for import of power from Eastern region.

With regard to the Mumbai Elevated Rail Corridor Project, it was decided in the meeting that the issue of whether the RFQ will be reissued is to be resolved by Railways within a week.

Railways will also provide exact timelines on completion of the Khurja-Kanpur, Kanpur-Mughalsarai and Mughalsarai- Sonnagar stretches.

Regarding the Ludhiana-Dadri stretch for which funding has yet to be fully tied up, the PMO said the Steering Group will review the matter in four weeks, after the committee on financing projects in Railways completes its work.

In the meeting it was also decided that Power Ministry will try to award 13 identified transmission projects as per the agreed timelines.

The PMO statement further said that in addition to Navi Mumbai, the Ministry of Civil Aviation will make efforts to move ahead on Goa (Mopa) airport as well.