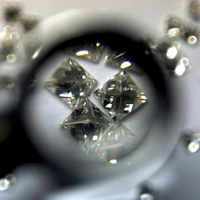 08 November, 2014
Print this article Font size -16+
A more positive outlook in China and India will help boost diamond sales this year, says De Beers, the world's biggest diamond producer, in a further sign the world economy is on a slow path to recovery.

De Beers forecast moderate growth in jewellery demand in 2013, in a turnaround from a 12 per cent decline in rough diamond prices last year, which it said was also in line with polished diamond prices.

"Despite macroeconomic concerns, demand for diamond jewellery continues to grow in the key markets of the US, China and Japan," Chief Executive Philippe Mellier said on a conference call.

Trading conditions in other developed markets were likely to be challenging, with stocks of unprocessed diamonds still high, De Beers added.

The holiday season for diamonds stretches from India's Diwali in November to this week's Chinese New Year, but questions remain about how long the good cheer will last. "The holiday sales have shown a modest improvement in pricing, but this is likely to diminish somewhat but remain stable in our view," Numis Securities analyst Cailey Barker said in a note to clients.

The diamond industry is dominated by De Beers and Russia's state-controlled Alrosa. They vie for the title of biggest producer, but De Beers is ahead by value as its stones tend to attract a higher price.

Total sales at De Beers decreased 16 per cent to $6.1 billion for the year ended December 31. Core earnings dropped 39 per cent to $1.08 billion.

Production fell 11 per cent to 27.9 million carats and De Beers said it planned no increase in 2013.

"If there is an upside, if we can see that the demand is slightly higher than what we are expecting, we could eventually ramp up into a bit more production," Mellier said on the call.

De Beers said it is spending 20 billion randon a new underground diamond mine that will become the largest in South Africa.