Dawn Of The Digital 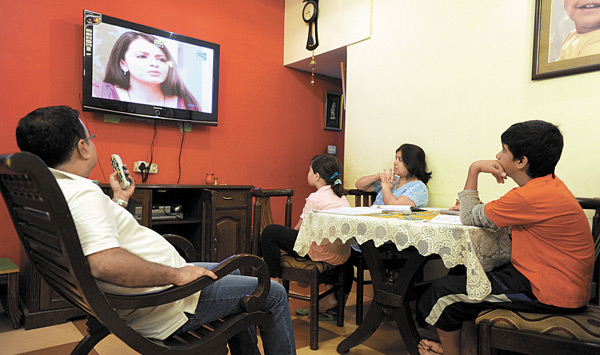 08 November, 2014
Print this article Font size -16+
Shrugging aside last-minute delaying tactics by local cable operators (LCOs), the Union Information & Broadcasting (I&B) Ministry stuck to its guns and pushed through the first phase of digitisation of cable TV networks. According to the ministry, on D-Day — 31 October — the four metros covered in the Phase-1 had achieved respectable levels of conversion, thereby, not justifying an extension.

Delhi homes, the ministry said, had achieved 101 per cent digitisation (conversion from analog signals to set-top box-monitored digital signals); Mumbai had achieved 118 per cent, Kolkata 85 per cent, and Chennai 63 per cent.
These figures are, however, misleading. The 100 per cent-plus figures for Delhi and Mumbai are accounted for by those homes that have more than one set-top box (STB), mostly in areas that had converted to the conditional access system (CAS) a few years ago. It, thus, means that large pockets in both cities still have illegal analog signals or have gone blank. Maharashtra’s Cable Operators’ Association president Anil Parab estimates that as many as 600,000 of Mumbai’s 2.5 million cable homes are still on analog systems.
In Kolkata, the analog system continues in most areas though chief minister Mamata Banerjee has softened her opposition and is willing to consider a changeover after Diwali on 13 November. In Chennai, there has been virtually no conversion of cable networks; of the 63 per cent digitisation estimated by the ministry, 56 per cent comprises direct-to-home (DTH) connections. Taking stock of the situation, the Madras High Court has given an interim extension till 9 November. State-run monopoly Arasu Cable TV Corporation pleaded that it had recently floated tenders for STBs and would need 18 weeks more for implementation.
However, the main point is: after a decade of delays and botched schemes, the government has not blinked. Speaking on the sidelines of the recently held Panaji film festival, the new I&B minister, Manish Tiwari, said cable digitisation would proceed according to schedule.
The digitisation of cable TV networks has led to a welcome consolidation of operations, with the larger, more professionally run MSOs like Hathway Cable, DEN Networks, and the Hindujas’ IncableNet being the biggest gainers. For these networks, digitisation was a make-or-break target.

“The local distribution lords ran the analog system; it was not pay-per-view but pay-per-mohalla,” said the head of Dish TV, Jawahar Goel.
The worst hit are the smaller networks who were expecting an extension. “Conversion is not just about STBs. We have to import a 300-channel headend and a sophisticated subscriber management system too,” says IncableNet’s director Ashok Mansukhani, adding that “those who had not planned for the makeover, or were waiting to get bought out by bigger operators, are now finding themselves eliminated”.
Those who have lost out include Digicable and smaller city operators such as the Vikki Chaudhari-promoted Home Cable TV in Delhi, who had not planned for conversion and are grappling with last-minute import of STBs after the deadline. Digicable and Manthan (in Kolkata) have 1.4 million subscribers between them, but admit they were caught off-guard and had been able to ‘seed’ only 500,000 boxes by 31 October.
If one is to go by the full-page advertisements from DTH service providers like Tata Sky and Airtel, it seems that DTH firms are the biggest gainers of the digitisation confusion. Tata Sky MD and CEO Harit Nagpal said, “In Delhi, Tata Sky has gained 10 times the normal run in the last month; in other cities it has been between two and five times.”
Numbers are hard to come by, but all don’t agree that the conversion from cable to DTH has been a stampede. “In both Delhi and Mumbai, cable may have lost out 15,000-20,000 subscribers to DTH.

Well-funded cable TV networks have been able to meet the DTH challenge. DTH, however, will be a major gainer in the next 38-city phase of conversion where the cable networks are not strong,” said Goel. “Airtel is enticing consumers with a free STB along with an annual subscription of Rs 2,400, or Rs 200 a month. Consumers have realised they get only the basic channels in this,” Mansukhani added.
In Mumbai, Ravi Singh, a joint venture partner of DEN Networks, says the problem now is rampant piracy and lack of policing. “Small cable operators have tapped digital headends by installing a ‘demodulator’ to convert signals to analog mode,” he says. Policing in the states is weak, and officials are looking the other way, he alleges.
Meanwhile, with digital systems allowing MSO networks to carry 500-plus channels, carriage fees (the unofficial payment extracted from channels for visibility and better placement) are coming to an end. This accounted for 20 per cent of the revenue of cable TV networks. However, with the erosion of the small, last-mile operators and the monitoring of subscriber revenue through STBs, the MSOs are not complaining.
(This story was published in Businessworld Issue Dated 19-11-2012)
Tags assigned to this article:
magazine business media and entertainment dth gurbir singh digitisation cas den networks othertop2 i and b ministry magazine 19 november 2012 manish tiwari dish tv