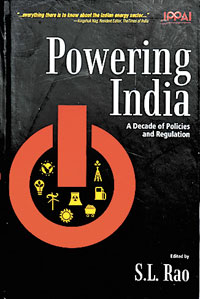 08 November, 2014
Print this article Font size -16+
Make no mistake, this is a technical book — difficult to read but important for its content. Academic Foundation and the Independent Power Producers Association of India, a private body that brings up issues related to energy in the private sector, have come together to put together papers on various aspects of the power sector in India, edited by S.L. Rao, the first chairman of the Central Electricity Regulatory Commission (CERC) and thus in a pole position to give an overview of the problems that new power plants face in India. The papers have been written by experts from private and public sectors.

The recent massive outage of electricity in northern India has suddenly drawn attention to the power situation in India. There is, perhaps, no part in India (except Jamshedpur) that can claim to have continuous and high quality supply of power across all user groups. Industrial production has been cut, export orders lost, malls have lost tenants and use of costly diesel power has been shooting up. It is said that if India’s current power demand is met, our GDP would be higher by more than a per cent. It is sad that we are unable to get a piece of the global manufacturing base because of lack of power.

The first chapter by Rao details the regulatory quagmire and sums up the reasons for why we cannot ever see higher power capacities coming up in India. Multiple regulations by the Centre and states will ensure that new power generation is nothing short of a miracle. Add to that the scams on coal allocation and the newfound vigour for environmental issues, sufficient power will not be a reality. The hold of the government and using key bodies such as CERC as a sinecure for retired and incompetent officials is the starting point in ensuring that progress is as close to zero if not negative. The legislative framework combined with the control of the government on key resources such as coal force only dishonesty among players who want to set up power projects. The author makes a strong plea for ‘independent regulation’, which is virtually akin to asking the politician to give up money making.

There are highly technical chapters on various issues ranging from operational and commercial to trading of electricity on the exchanges. And there are detailed discussions on nuclear power and alternative energy. Most are specialised and will skip the average reader. For a book that is covering so many facets of power generation, it does not make any serious comment on free power being given by so many states. It is also interesting to read that there are laws that make it difficult to set up captive power plants. The book thoroughly exposes the mess that the government has created over the years and there is a very remote possibility that things will get better. The solutions offered are too technical in nature, and most of them end up with comments on regulators retaining too much power over providing the infrastructure.

Surely, the nation is headed for darkness.