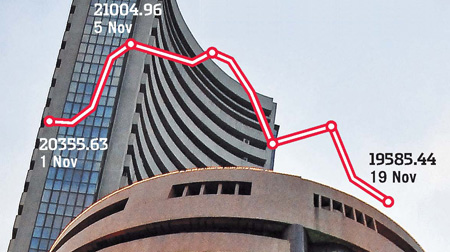 Perhaps it is natural that after their spectacular performance, Indian markets would react negatively to such news. Despite this sharp correction, the Sensex is still up by 12 per cent in the year so far. "After September's and October's rapid rise, the market is consolidating and going through a correction," says Alok Sama, founder and president at Baer Capital Partners. "Global factors can affect foreign institutional investors (FIIs) who own around 14-15 per cent of the Indian market. A change in currency or credit situation can result in withdrawal of these investments."
In the meanwhile, capital continues to flow into Indian equities; despite the sharp fall in the market indices there has not been any major impact on the FII flows. Till 16 November, FII inflows into equity remained buoyant at $3.85 billion; for the year, FII flows are at a record high of $28.6 billion.
"Fund managers have had a good year and they are capitalising on it by booking profits ahead of the year-end," says a dealer from a foreign brokerage firm who wished to remain anonymous. "After all, they, too, want to take home a good bonus." Marketmen say that in the months of November and December, there is usually some selling; the market will bounce back in January-February once fresh allocations are made. "The Indian market just touched its previous high," says Sama. "The economy is growing at 8 per cent-plus. What it means is that the market is yet to achieve previous high valuations."
Global economic growth, on the other hand, is not likely to be very robust. With so many countries focused on controlling their fiscal deficits, growth in the developed economies will barely be above 1 or 2 per cent. Investors can't stay away from growing economies and markets like India, analysts say. But then again, it is not certain that the weather will clear up soon. (This story was published in Businessworld Issue Dated 29-11-2010)
Tags assigned to this article:
magazine growth markets sensex bse iip mahesh nayak fiis equity foreign