Dance is something close to my heart: Madhuri Dixit on 13 years of 'Aaja Nachle'

Dance is something close to my heart: Madhuri Dixit on 13 years of 'Aaja Nachle'

Mumbai (Maharashtra) [India], November 30 (ANI): Reminiscing about the time spent while shooting the 2007 released dance film 'Aaja Nachle', Bollywood actor Madhuri Dixit, celebrated 13 years of the musical film on Monday.
While fondly celebrating the anniversary of the movie, which was her second venture with Yash Raj Films, Madhuri took to her Instagram on Monday and shared a celebratory poster of the film along with some unknown facts captioned, "Dance is something close to my heart and makes this film special." 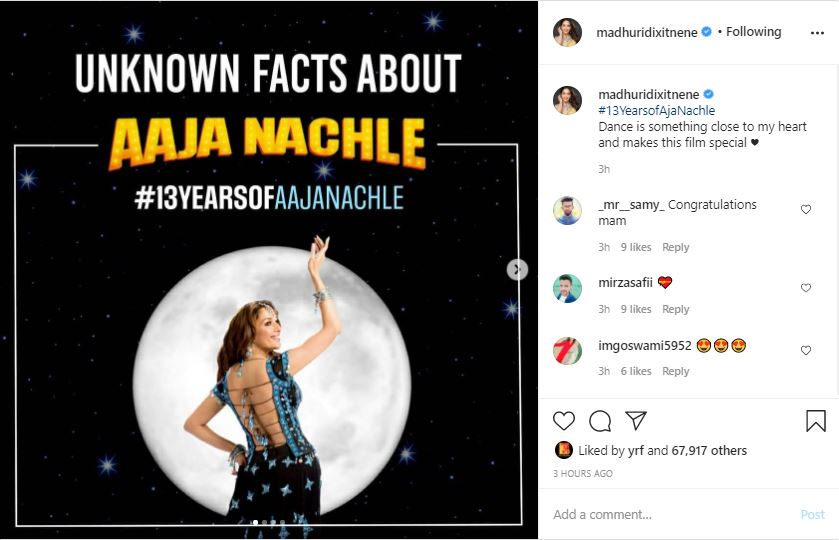 The actor took a trip down memory lane and revealed that the super hit song 'Aaja Nachle', initially was not the first preference for being the title track of the film. It was only after when the other song did not work out, the makers decided to make 'Aaja Nachle' their title track.
Madhuri, who after her wedding with Dr Sriram Nene had shifted to the US, also revealed in the Instagram post that Aditya Chopra, the producer and story writer of the movie, had flown there to narrate the film personally to her and get her on board.
The 'Dhakdhak Girl' had done the film back in 2007 after a five-year hiatus from the big screen. Other than Madhuri Dixit the star cast of the film also included names of power performers like Kunal Kapoor, Konkana Sen Sharma, Divya Dutta, Ranveer Shorey, among several others. (ANI)