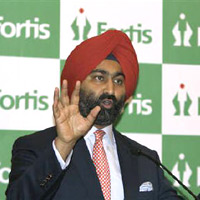 08 November, 2014
Print this article Font size -16+
Former promoters of Ranbaxy on 23 May (Thursday) rebutted the current Japanese owner's allegations of hiding information on US probe into drug adulteration, saying they did not misrepresent any facts or falsify any data.

Malvinder Mohan Singh, the former promoter of Ranbaxy, said he was shocked at allegations made by Daiichi Sankyo and asserted the Indian promoters never concealed any fact at the time of selling 34.82 per cent stake to the Japanese firm for about Rs 10,000 crore. "We strongly deny that Singh family falsified any data. There was no concealment of facts," Singh, who is also the Executive Chairman of Fortis Healthcare.

"Daiichi Sankyo believes that certain former shareholders of Ranbaxy concealed and misrepresented critical information concerning the US DOJ and FDA investigations," the Japanese company said in a statement on its website on Wednesday, adding that it was pursuing legal remedies. Daiichi had on Wednesday also threatened to sue Singhs for these reasons.

"Allegations of concealment and misrepresentation are false and baseless. I don't know where it came from... There's no concealment or misrepresentation of anything," Singh said. Daiichi conducted a detailed due diligence before buying a stake in Ranbaxy, he said expressing surprise at the Japanese firm making the allegation five years after Singhs sold a majority stake in Ranbaxy to them. The Japanese firm went into the deal after satisfying itself with its due diligence, with knowledge of the US DoJ and FDA probe and with the benefit of legal advice, he added.

"The belated suggestion, made years after the fact, that information was concealed from and/or misrepresented to Daichii Sankyo is false and designed to divert attention away from Daiichi Sankyo's own failures to protect itself and its shareholders in the negotiations and agreement with the Singh family shareholders of Ranbaxy," the statement said.

Ranbaxy's US settlement last week was the largest-ever with a generic drugmaker over drug safety and had been in the works for some time. In December 2011, Ranbaxy set aside $500 million to resolve the potential criminal and civil liabilities related to the investigation into its manufacturing practices and falsifying data. Ranbaxy reached a related settlement agreement with the U.S. Food and Drug Administration in 2011.

"I am talking to you today not because of their (Daiichi) success or failure. I am talking to you today because they have raised a finger at us. We built this company over decades with hardwork and cannot let anyone spoil our reputation," Singh said. He claimed the Japanese firm was making the allegations to divert attention from its own failures.

The Singh brothers, together worth $2.6 billion, according to Forbes, control Fortis Healthcare and financial services group Religare Enterprises. Malvinder Singh, now 40, had agreed to remain as CEO of Ranbaxy, India's largest drugmaker by sales, for five years following Daiichi Sankyo's takeover but left in 2009.

Last week, Ranbaxy pleaded guilty to "felony charges" relating to manufacture and distribution of certain adulterated drugs made at two plants in India and agreed to pay USD 500 million in settlement with the US authorities.

Shares of Ranbaxy on Thursday slumped by nearly 9 per cent to end at Rs 393.15 apiece on BSE.