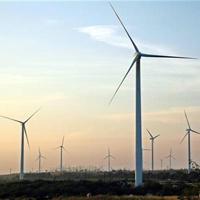 08 November, 2014
Print this article Font size -16+
DLF Ltd said on 31 January' 2013 it would sell part of its wind power assets with a capacity of 150 megawatts to Bharat Light and Power Pvt Ltd for Rs 282 crore as part of its plans to reduce debt.
DLF signed an agreement with BLP for the transfer of the assets, located in Kutch in Gujarat, the statement said.
DLF has a total of 227 MW capacity wind turbines across four Indian states, it said.
DLF, which builds homes and offices mainly in its key market of northern India, said in November last year that it intended to sell non-core assets to reduce its Rs 23,200 crore worth of debt.