DLF Board To Meet On Wed To Consider Share Sale 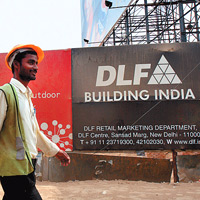 08 November, 2014
Print this article Font size -16+
DLF Ltd, India's biggest property developer, said its board of directors will meet on Wednesday to consider the sale of shares to institutional and retail investors to comply with the minimum public shareholding rules.

DLF, 78.58 per cent owned by its founders, is seeking shareholder approval for a share sale by June to meet the market regulator's requirement of having at least 25 per cent public shareholding, which is mandatory for Indian listed companies.

The New Delhi-based developer, founded by billionaire K.P. Singh, is expected to sell about 81 million shares, raising about 20.31 billion rupees according to Reuters calculation based on its share price of 250.70 rupees as of Monday's close.

Shares in DLF, which builds homes and offices predominantly in north India, have surged more than 10 per cent since the beginning of the year, outperforming the Sensex, which is down about 2 per cent.

However, the company's shares are still trading at a significant discount to its life-time high of Rs 1,208 in January 2008.