Curtains Down For 160-year-old Telegraph Service 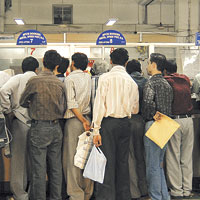 Smart phones, emails and SMS seem to have pushed the humble telegram service to a quiet corner with the BSNL deciding to discontinue the 160-year-old telegraph service from July 15.

Once the main source of quick and urgent communication, the service delivered many happy and sad news to people spread all over the country.

But with the advent of technology and newer means of communication, the telegram found itself edged out.

The circular sent to various telecom district and circle offices as per the instruction of a competent authority denotes that telegram services will be closed from 15 July and as a result all telegraph offices under the management of BSNL will have to stop booking telegrams from July 15.

The circular has also directed the telecom offices to maintain the log books, service messages, delivery slips only for six months from the date of bookings. However, complaints, press reports and other messages from different consumer forum are to be kept for one year.

Sources at BSNL Delhi said, "We had asked the government to support the service as it was not commercially viable and the government said the BSNL board should decide on it.

"We have taken a decision to close the service after consultation with the Department of Posts. They also said that there are better options available," the sources said.

The BSNL has instructed that surplus telegraph staff members would be deployed to mobile services, landline telephony, broadband services and shifting could take place within the next 3 months.

Within a short time of BSNL handling telegram services in 1990s, the PSU had a rift with the Department of Posts following which telegrams were accepted as phonograms from various villages and other centres from telephone consumers.

This too had restrictions and embargo during certain hours.

Talking to PTI over phone, R Pattabhiraman, the state secretary of National Federation of Telecom Employees said, "Before taking such a decision, the PSU should have consulted trade unions on the issue of deployment of the so-called surplus employees. There will be many issues and dissatisfaction among staff members when the exercise of shifting staff to some other portfolio or locations is made.

"Similarly, it is not known whether the Government consulted or took the guidance from stakeholders like consumer councils, consumers of telegraph services and judiciary," he said.

Pattabhiraman pointed out that Indian courts had accepted only telegrams and telegram receipts as proof of evidence in civil or criminal suits. It was also a handy mode of communication for jawans and armed forces for seeking leave, transfer or joining reports.

Instead of scrapping the service, it should have been handed over to the postal department which was handling the services right from its inception in the 1850s.

R Shanmugham, a social activist, said stopping a live wire service like this can be decided only by an enactment of a suitable law or amendment.

Faced with declining revenues, the government had in May 2011, revised the telegram charges after a gap of 60 years.

The telegram charges for inland services was hiked to Rs.

Two months ago, telegram services for overseas communication was withdrawn by BSNL.