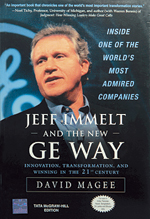 To follow an act like that of the legendary Jack Welch is difficult. And that was just what Jeff Immelt tried. He took over a nimble giant that GE was under Welch in 2001. But all his grand plans for the company's transition to the future were grounded four days after he took up the top job: 9/11 occurred. That was the first of several events that would set the world on a more sobering path than what it had known in the easy 1990s. The economy slowed down, taking with it the bubble in the stockmarkets and housing sectors. Credit suffered, and so did consumer confidence. GE lost about $80 billion in market capitalisation in the days that followed.

In Jeff Immelt And The New GE Way (Tata McGraw-Hill), David Magee explains how Immelt understood that to steer GE into the 21st century the company's business mix and business geography needed to change. Given that emerging economies such as India and China were abounding with opportunities, it made sense to go after new key relationships. Combining all the different elements needed to drive the company, he identified six key elements around which GE's growth was to revolve — technology, commercial excellence, customer focus, globalisation, innovation and developing growth leaders.

Immelt has survived christening by fire. But GE, he says, teaches its people how to perform, troubleshoot and drive changes regardless of the circumstances. A good read.