Cricket runs through my veins, filled with mixed emotions upon retiring: Suresh Raina

Cricket runs through my veins, filled with mixed emotions upon retiring: Suresh Raina

New Delhi [India], Aug 16 (ANI): A day after announcing retirement from international cricket, left-handed batsman Suresh Raina on Sunday said that cricket runs through his veins and he is filled with mixed emotions upon retiring from the game.
Raina's decision to retire from international cricket came just minutes after Dhoni's announcement to call time on his career in international cricket.
The southpaw posted a video of all his glorious achievements on Instagram and he captioned the post as: "With a lot of mixed feelings I am able to make this announcement of my retirement. From a very young age, I as a small boy had literally lived Cricket on every street, gali, and nukkad of my small town before making it to the Indian team. All I have known is cricket, all I have done is cricket and it runs through my veins."
"There has not been a single day without counting my blessings and without acknowledging everything I have received from god and my people who showered nothing but love on me. All I strived for was to value those blessings and give my everything in return to my game, to my country and everyone who has been a part of this journey. I had multiple surgeries, setbacks and moments when I felt that this is it but I did not stop or settle for anything which was not justified," he added. 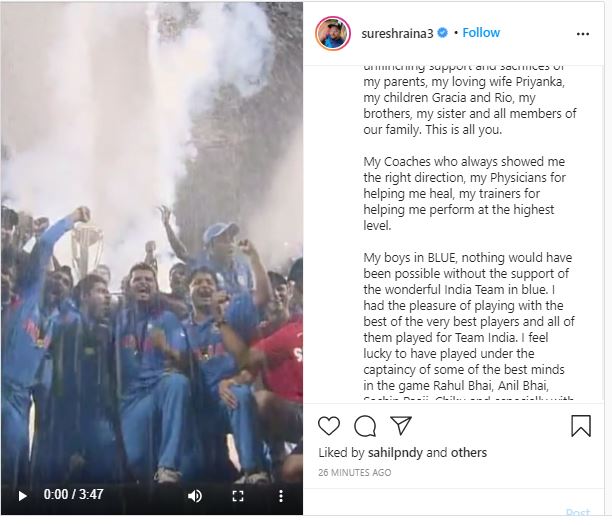 The left-handed batsman also thanked his family and the coaches who mentored him during his playing days.
"It has been an incredible ride and it would not have been possible without everyone who supported me during my ups and downs. This journey could not have been possible without the unflinching support and sacrifices of my parents, my loving wife Priyanka, my children Gracia and Rio, my brothers, my sister, and all members of our family. This is all for you. My coaches who always showed me the right direction, my Physicians for helping me heal, my trainers for helping me perform at the highest level," Raina said.
He also thanked Dhoni for guiding him as a friend and mentor.
"My boys in BLUE, nothing would have been possible without the support of the wonderful India Team in blue. I had the pleasure of playing with the best of the very best players and all of them played for Team India. I feel lucky to have played under the captaincy of some of the best minds in the game Rahul Bhai, Anil Bhai, Sachin Paaji, Chiku, and especially with @mahi7781 for guiding me as a friend and mentor," he added.
On Saturday, Raina's announcement to retire came minutes after MS Dhoni's decision to bid adieu to international cricket.
"It was nothing but lovely playing with you, @mahi7781. With my heart full of pride, I choose to join you on this journey. Thank you, India. Jai Hind," Raina had posted on Instagram.
It was on July 30, 2005, when Raina made his debut for the Men in Blue. He went on to make his debut in an ODI match against Sri Lanka at Dambulla.
In his first ODI, Raina did not have a good outing as he was sent back to the pavilion on a duck. But over the years, the left-handed batsman managed to change his fortunes to become one of the finest white-ball cricketers.
Raina is also the first Indian batsman to register centuries in all three formats of the game. The 33-year-old has played 18 Tests, 226 ODIs, and 78 T20Is for India. Raina also cemented his place as one of the best fielders ever to play the game for India.
With Raina on the field, the opposition was always reluctant to run when the ball used to go him, and the cricketer rarely missed any catches. Raina, always chirpy and bubbly on the field, has always been a team man.
The left-handed batsman scored 5,615 runs in ODI cricket at an average of 35.31. He also registered 768 runs in the longest format of the game with his highest score being 120.
In the shortest format of the game, Raina scored 1,605 runs at an average of 29.18. He was also a part of the 2011 World Cup-winning squad and the batsman had played crucial knocks in the quarter-finals and semi-finals of the tournament.
Raina would now be seen in action for the Chennai Super Kings (CSK) in the Indian Premier League (IPL). The tournament is slated to begin on September 19 in the UAE.
Dhoni and Raina are popularly known as Thala and China Thala among the fans of the franchise. Raina is also the second-highest run-getter in the history of the IPL, only behind Virat Kohli.
The batsman has played 193 matches in the tournament and has managed to score 5,368 runs at an average of 33.34. (ANI)