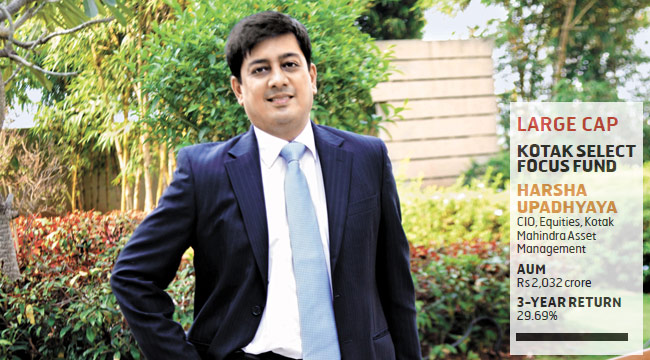 31 March, 2015
Print this article Font size -16+
One basic skill hockey goalkeepers learn early in life is to manage ‘shot’ angles properly. If, as a goalie, you manage to cover 10 field angles,  across six zones on the net, you are well set to block any strike at the goal.

Kotak Mutual’s Harsha Upadhyaya mastered angles by blocking soft shots during practice sessions at the Mangalore University hockey pitch. These sessions not only helped him concede fewer goals during inter-university matches, they also stood him in good stead in his career as a fund manager. Upadhyaya has been able to stave off potential dangers to his portfolio quite effectively.

“We’ve reduced the number of stocks in Select Focus Fund to about 45 now,” says Upadhyaya. “The idea is to have a concentrated portfolio at the sector level and take meaningful active bets on stocks.”

“The portfolio is structured and managed with a long-term view. Average holding period in this portfolio is about 2.5 years. Only long-term strategies help in creating wealth,” Upadhyaya adds.

Select Focus Fund’s asset base has also gone up from Rs 300 crore a couple of years ago to over Rs 2,000 crore currently. The fund has logged negative returns only once in the last five years — in 2011, when it dished out a -22 per cent return to investors. The rest of the time, the fund has stayed ahead of its benchmark (CNX 200).

Although the fund’s mandate allows it to invest across sectors, Select Focus has concentrated on financial, automobile and technology stocks. The fund is seen to be reducing its exposure to IT and pharma companies.

“For the past year our focus was more on buying interest-rate-sensitive sectors. We’ve increased our allocation to banking and automobile stocks,” clarifies Upadhyaya.

Select Focus Fund has a large-cap tilt, parking 70-75 per cent of its assets in large-cap stocks. The remaining part of the pool gets allocated to predominantly mid-cap and a few small-cap companies. The fund has not seen many market cycles, but it weathered the downtrending markets of 2011 and 2013 appreciably well, outperforming its benchmark in both the instances.

“Kotak Select Focus is good for all regular investors. Investors should do well if they remain invested in the fund for three-four years or more. The fund’s mid-cap exposure acts like a return kicker over that period,” says Upadhyaya, who continues to draw lessons from the hockey practice sessions of his university days — cover all angles and block all incoming shots.