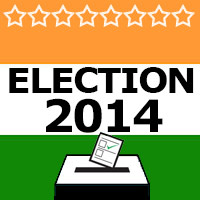 08 November, 2014
Print this article Font size -16+
Votes polled in the nine-phased Lok Sabha elections will be counted on Friday (16 May) to decide who will form the next government.

Election Commission said the counting exercise to be held at 989 counting centres is likely to be completed by 5 PM and trends will be available by 11 AM.

By noon, a final picture could emerge on who would be the major players in the 16th Lok Sabha.

The exit polls have projected that BJP will emerge as the single largest party.

The 'ballot unit' is switched on in the presence of senior poll officials and counting agents of candidates and the result command keyed in to get results per machine.

These were the first Lok Sabha elections when the option of 'none of the above' or NOTA was introduced on the EVMs following Supreme Court directions to ensure secrecy of voters who use this option.

Before NOTA button was installed on EVMs, voters had to fill up form 49 'O' at the polling station which compromised their identity.

Where a paper trail audit or 'voter-verified paper audit trail' (VVPAT) has been used, the counting agent can call for a count of the paper slips in the drop box attached to the voting machine, but a final count is taken by the returning officer.

The polling in all phases was by and large peaceful barring a few incidents by Maoists and some poll-related violence.

Lok Sabha elections 2014 witnessed the highest-ever turnout with 66.38 per cent of an estimated 814 million voters exercising their franchise - the highest ever in the history of general elections.

Once the results are declared, the names of the winning candidates will find mention in the gazette to be issued by the Election Commission.

The gazette notification will initiate the process to form the next Lok Sabha.

The campaign held in blistering heat in several parts of the country was replete with barbs by various political leaders.

During the high decibel campaign marked by vitriolic accusations, Modi constantly targeted Rahul as 'shehzada' and the UPA dispensation as the 'mother-son' government besides going after Sonia's son-in-law Robert Vadra over alleged land deals.

He also hurled barbs at the UPA government, saying it represented the 'ABCD' of corruption, referring to Adarsh, Bofors and Coal scams. He also took a 'RSVP' jibe at the Nehru-Gandhi family, saying R stood for Rahul, S for Sonia, V for Vadra and P for Priyanka.

He often ridiculed his rival parties for having a one-point "Stop Modi" agenda.

The BJP Prime Ministerial candidate also had his share of criticism with several leaders taking him on in connection with the 2002 post-Godhra riots in Gujarat.

The Trinammol Congress in West Bengal called Modi the "butcher" of Gujarat after he escalated his attack against Chief Minister Mamata Banerjee, saying there is no "poribartan" in the eastern state.

Taking the political battle to an all time low, SP leader Azam Khan called Modi an elder brother of a "dog's pup" while Union Minister Beni Prasad Verma of Congress dubbed the Gujarat Chief Minister as the "biggest goon" of RSS. Verma had also dubbed Modi as a "monster".

Sonia and Rahul put Modi in the crosshairs over alleged favours given to the Adani group in land deals and claimed that he favoured only select industrialists. Rahul hurled "balloon" and "toffee model" barbs at the BJP Prime Ministerial candidate.

The Congress also attacked Modi for constantly harping on Gujarat model of development, claiming there has been no development at all in the western state during his rule.

Priyanka was also brought into the campaign by the Congress towards the later stages and managed to energise the cadres in UP. But she confined her campaign to Amethi and Rae Bareli.