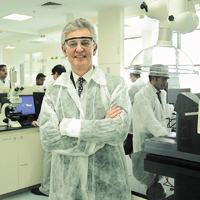 Pfizer, the world’s largest drug maker, has completed a $40-million investment (about Rs 185 crore) in a new research and development (R&D) and pilot manufacturing facility for animal healthcare in Thane, near Mumbai.

This is Pfizer’s first significant investment in owned R&D infrastructure in India in the past decade, if not longer, though the company has been sponsoring clinical trials of its drugs in Indian hospitals since 1997. Juan Ramon Alaix, president of Pfizer Animal Health, says “cost” and “science” are two key reasons for choosing India for its first animal health R&D lab in Asia.
With a staff strength of 65, the facility will work with other Pfizer animal health R&D centres in the US, Australia and western Europe. Its key tasks will be to figure out new and efficient processes to make drugs, to develop formulations (tablets, capsules, etc.) and to prepare ‘dossiers’ of drugs for submission by Pfizer to regulators around the world.
It will take on new projects and a few that were earlier handled by one part of a UK operation that Pfizer shuttered in the wake of its merger with compatriot Wyeth. The facility will be used to make pilot batches of the drugs prior to commercialisation and for clinical trials. “This (centre) will help us accelerate our ‘going to market’ process,” says Alaix.
Pfizer’s $3.5-billion animal health unit researches and hawks medicines such as antimicrobials, antiparasitics and vaccines for cattle, poultry and companion animals.
The R&D inauguration follows Pfizer’s decision to acquire Vetnex, a $26-million (2008 revenues) Indian company making generic veterinary drugs, last year. The acquisition was primarily to bulk up Pfizer’s presence in the Indian animal health market and also provide a source to export branded generics from India. “The acquisition was not for cost synergies, but to develop opportunities for the Indian market,” says Alaix. “It also provides us a platform for selling branded generics around the world.”
Pfizer leads in the Indian vet market and is clocking growth in ‘high double-digits’. Its investments are further proof that large pharmaceutical firms are willing to overlook India’s fledgling intellectual property protection regime, and drug price control rules in their quest to improve the cost and speed of getting new drugs to market, and to participate in India’s high-growth economy. The Indian animal health market is estimated at $300 million, growing at 7 per cent.
The R&D lab is the first of a number of steps planned by Pfizer Animal Health to leverage the India opportunity. The unit is keen to beef up its biologicals capability, such as vaccines, especially ‘localised’ vaccines or those developed against disease strains specific to India, and plans to do so in partnership with research institutions. “We already have some (partnerships) ongoing,” says Alaix declining to name them. “Acceleration is required”.
(This story was published in Businessworld Issue Dated 15-02-2010)
Tags assigned to this article:
magazine gauri kamath research pfizer clinical trial