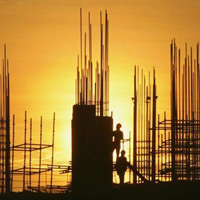 08 November, 2014
Print this article Font size -16+
India's annual infrastructure output growth accelerated to a two-month high of 5.8 per cent in August, government data showed on Tuesday (30 September), helped by a jump in steel and coal production.

Good performance by the coal, cement and electricity generation sectors lifted the eight core sectors’ growth rate to 5.8 per cent in August against 4.7 per cent in the same month last year.

The negative-growth sectors include crude oil output, which shrank 4.9 per cent and natural gas production declined by 8.3 per cent. Refinery products output was down 4.3 per cent and fertilizer production fell 4.3 per cent. Cumulatively, in the first five months of 2014-15, the eight sectors grew 4.4 per cent against marginally faster than the 4.2 per cent in the same period of the previous year.
Tags assigned to this article:
dell honeywell payu yahoo weather app ali raza