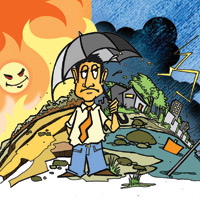 08 November, 2014
Print this article Font size -16+
Put yourself in the shoes of a future President of the Maldives. The earth has been warming relentlessly for several decades, and the rising sea is about to wipe the island nation off the world map. There are some untested ways to stop the warming and the sea level rise, but they would adversely impact other nations. What would you, the Maldives President, do?

In the past few months, some of the world's leading climate experts have been debating one question: how do we act in an emergency? Tampering with the Earth's climate goes by the respectable name of climate engineering, but it is an exercise fraught with dangers. We may need to use it if the world does not cut the carbon dioxide emissions immediately, or probably even if we do. Many participants in the debate, including a few Noble Prize winners, have begun advocating a strategy of research and limited field-testing of climate engineering concepts. Says Roger Pielke, climate change researcher and professor at the University of Colorado: "Scientists and economists are now looking at climate engineering as a back-up plan."

Earthly Concerns
Climate engineering was a hypothetical subject three years ago, but has suddenly taken centerstage in the climate debate. Leading environmental organisations have begun studying the topic. John Holdren, US President Barack Obama's advisor on science and technology, recently said climate engineering was being discussed as a last option in the White House.

The topic is even seeding start-ups. Climos, a San Francisco-based climate engineering company, raised $3.5 million from the venture capital firm Braemar Energy Ventures two months ago. Global Research Technologies (GRT), a climate engineering startup from Columbia University, is looking to raise the first series of financing after proof of concept.

A climate engineering scheme has one of the two objectives: to reflect sunlight away from the Earth, or to capture atmospheric carbon dioxide and bury it underground. Some of the methods are quick, cheap and very likely to work. For example, to reduce the Earth's temperature by two degrees through a cut in emissions it takes several decades, if not a century; in contrast, small sulphur particles high up in the atmosphere can do the same in two years. But it could have unforeseen impacts. Says Phil Rasch, chief scientist for climate science at the Pacific Northwest National Laboratory in Washington state: "It is almost certain that there would be winners and losers in climate engineering."
Using current technologies, it would take a substantial portion of the world's GDP to stabilise the Earth's temperature through emission reductions. Sulphur aerosols can do it for a few billion dollars and a recurring budget of $100 million a year. It can also produce acid rain, destroy part of the ozone layer and interfere with rainfall patterns, but there could be ways of managing these effects. The low cost is not always a positive point. What if one of the world's rich suddenly feels inspired enough to embark on a ‘save-the-world' project? Who will have the legal power to stop them?

Injecting sulphate aerosols is not the only climate engineering trick being explored by experts. We could, to take another example, cool the Earth by increasing the reflectivity of some clouds over the ocean by constantly spraying seawater. It seems benign because only salt and water will be used. A small experiment funded by the Discovery Channel suggests that it could work. And it may not have a disruptive effect over rainfall as would sulphur particles. Says Govindaswamy Bala, climate engineering researcher and professor at the Indian Institute of Science: "Preliminary results of my cloud seeding simulations show that rainfall over land may not reduce." Bala himself prefers options like large-scale afforestation over climate engineering. Besides, the long-term impact of constant cloud cover over the oceans is still unknown.

Reflecting sunlight away from the Earth solves only part of the planet's climate problem. Increasing carbon dioxide emissions have effects such as ocean acidification with serious consequences to marine life, and these cannot be counteracted by reducing sunlight.

The costs of air capture vary widely. The Columbia group led by Professor Klaus Lackner has perhaps the cheapest method, but even that costs about $200 per tonne of carbon. But Lackner, who has set up GRT, is confident of bringing it down to $30 a tonne. At that cost, petrol will cost only seven cents a gallon (it costs about $3 a gallon now in the US). "The big advantage of air capture," says Lackner, "is that carbon dioxide can be removed from anywhere and not just at source."

Currently, policymakers, scientists and economists do not take air capture seriously because of its high costs. But after comparing all the climate engineering methods, Pielke has concluded that air capture is only as expensive as other options. In the long run, it could turn out to be the only effective solution. Reflecting sunlight could be a short-term fix, while air capture can one day return the Earth to a stable pre-industrial climate. It could also serve as a second back-up plan, if the aerosols and cloud seeding prove to be too dangerous.