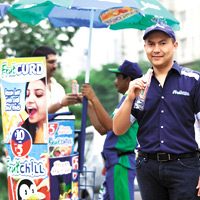 You can crow "Thanda matlab Coca-Cola". But in a country where a village is declared electrified if 10 per cent of its households have power, it is tough to live up to the tagline. Preeti Devi, a kirana store owner in Nagla Sabla village, 15 km from Agra, has found a way to live it up. Her secret is eKOCool, a solar-powered refrigerator priced at Rs 45,000, supplied by Coca-Cola. It can store two crates of coke or 48 bottles of 300 ml. The company has set up 20 eKOCool's in villages in and around Agra. Devi does brisk business. "My husband and I run the shop, and we make Rs 20,000-30,000 a month. We cater to about 1,500 people." She sells 20-30 bottles a day, and gets Rs 2 on each bottle. The mother of three has another reason to cheer. The solar panel on her roof lights up her house and charges the family's proud possession, a mobile phone.

Far from Agra, in Maharashtra's Osmanabad district, Godrej is subverting in-shop retail. In late 2009, it launched chotuKool, a refrigerator priced at Rs 3,450, in rural Maharashtra. It is sold through the India Post network and a tie-up with Swayam Shikshan Prayog (SSP), an NGO that links women entrepreneurs, village institutions and corporations under Sakhi Retail. It currently has 860 women in 1,000 villages working for it.

"We stock 5-6 refrigerators in each of our five warehouses across Maharashtra. As and when a sale enquiry is made, the product is dispatched to the ‘Sakhi' or women entrepreneur of the village," says Upmanyu Patil who heads Sakhi Retail in Osmanabad. It has been a success; 100-150 units were sold through SSP. Over the past 18 months, Godrej gathered feedback from consumers, tweaked the product and introduced a new variant in February with a price of Rs 3,750-4,000. "The idea was to create a community that uses this product, talk about it, and shares their feedback. So we reached out through SSP and post offices," says G. Sunderraman, vice-president of corporate development at Godrej & Boyce. The company will look at similar tieups in the north by the end of this year.

Why Step Out Of The Box?

Coca-Cola now reaches about 120,000 villages. It wants to push its way through the hinterland where per-capita consumption of the amber liquid remains the lowest — 11 servings per person compared to an average of 89 globally. But for this, it has to hop over storage and distribution woes. Asim Parekh, vice-president (technical) at Coca-Cola, rewinds to the time when Atul Singh, president (India and South West Asia business unit), was on the lookout for refrigeration solutions for the rural market.

"It is a simple statistic. India has 638,000 villages, of which 88 per cent are electrified according to government data." But this is misleading; only half of these receive proper electricity anyway. "There is no supply-chain because there is no cooling and when there is no cooling, there are no buyers. So we worked on a few models that were sustainable for the rural market."

Parekh and his team started working on eKOCool about two years ago and roped in Western Refrigeration for technical support. The initial models were quite expensive, at $3,000. But over the past years, they have managed to create a product fit to be piloted in the market. "We are anticipating the cost to go down further," says Parekh. A regular refrigerator costs any beverage firm Rs 10,000-12,000, which is borne by the company itself. So how does Coke plan to recover the high-input costs? "We are looking at a high volume game that will help us break even," says Parekh.

break-page-break
The Great Food and Beverage Company was born out of the need to create an alternate distribution channel. "Cold chains remain a big problem, especially for ice cream companies. So, we had to develop an alternate channel," says Paez. The research behind picking the right distributor in the right neighbourhood is quite scientific and done in-house.

"We set up dealers and micro-dealers across the city, gave them assets such as pushcarts, ice-boxes and the merchandise," says Paez. These dealers, in turn, appoint 5-10 salesmen (for a radius of 6-10 km), who work on commission on per unit sale. "Each creates his own network and is the centre point for inventory," says Paez. If you are a good distributor, you can make anything between Rs 60,000 and Rs 1 lakh a month.

On a Rs 10 product, 40 per cent of the cost goes on packaging, while 38 per cent is the margin for the distributor and the salesman collectively. That leaves a tight 22 per cent for the product and profit margin. The monthly target per salesperson is 50,000 units per. Currently, the firm is selling close to 150,000 units a day.

For some, this is a case of déjà vu. Take Yakult, for example. Back in 1963, the Japanese company came up with a system to distribute pro-biotic milk to the masses. Targeting mothers and children, the Japanese company appointed door-to-door saleswomen, Yakult Ladies, as their sales mascot. "It was a great way to connect with people and tell them the importance of probiotic milk," says Mukta Sanjeev, AGM-home delivery system at Yakult Danone India.

In 2006, when Yakult entered India through a joint-venture with Danone, it started with 30 Yakult Ladies. The number has reached 180 now. The company's scooter-based woman workforce functions as a business model separate from retail. This accounts for 40 per cent of its sales. The rest is through a 2,100-strong Yakult retail channel.

"They are more like independent agents who work on commission," says Sanjeev. Each Yakult lady is allotted an area, and typically services 4,000 houses. She is responsible for initial build up of the data base and delivery of the product to each family. For all of this, a Yakult lady gets Rs 6,500 a month, along with the commission.

"I have a regular nine-to-five job," says Rekha, who has been with the firm for over three years now. "I heard about Yakult from a friend and was keen on learning how to ride a scooty," she chuckles. Her daily sales target is 150-200 bottles. She earns 10-15 per cent on every Rs 10 bottle sold. It is not very different on the retailer, which hovers at about 10-12 per cent. Yakult manages to sell 60,000 bottles a day in India. Its plant in Sonepat has a capacity of a million bottles a day. "We will break even once we reach 125,000 bottles a day," says Kiyoshi Oike, managing director, Yakult Danone India.

To Hold Or Let Go
How far will the alternate distribution model help companies go? "Investment in non-store retail is a trend in both urban and rural markets. Be it in the form of direct to consumer, tele-retail or e-commerce, companies are investing," says Nangia.

Yet, it is hard to get a clear fix on the distance one can go. Will these networks cross-sell? SSP in the past sold products for D'Lite (solar lamps) and HUL Pureit, too. Although the model (Yakult Ladies) works best to create awareness vis-à-vis the product, the cost of execution works out to be more expensive compared to regular retail. But will the ratio change in the near future? "Eventually yes. Even though the Yakult lady system is more expensive than traditional retail, we will continue to invest more into this. Globally, it is a successful model and a more focused way of creating awareness and sales," says Sanjeev.

Chillicks wants to stick to its current model. Its popsicles are not to be sold at retail outlets. "We are focused on this channel and are not looking to sell through the regular retail route. The unique selling proposition of the brand is the pushcart. When consumers see our uniformed sellers with their carts, it creates its own brand identity," says Paez.

For now, the company is focusing on bulk-sales and anticipating a period of two years to reach an operational break even. For Godrej, regular urban retail is a big no for now. "We are not eyeing the urban markets, but are looking at north India through NGO associations and India Post," says Sunderraman. Whoever said retail was all about detail was spot on.