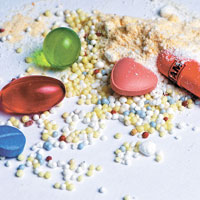 08 November, 2014
Print this article Font size -16+
A few weeks ago, a UK-based paper alleged that a third of the antimalarial drugs available in African countries, and originating from China or India, may be counterfeit or substandard. India has strongly denied the report, and the Pharmaceutical Export Promotion Council (Pharmexcil) has traced the allegation to some foreign academic research papers published over a year ago.
When a similar complaint of “India-made” fake drugs had risen in 2009, Indian and African drug regulators had traced the origin to China. The illegal facility, which was reportedly shut down by Chinese authorities, was shipping drugs with “Made in India” labels to capitalise on India’s reputation.
“Pharmexcil is constantly updated by Indian embassies and monitors published reports. We are committed to addressing all such issues, if any, the moment we receive complaints,” says Pharmexcil director general P.V.  Appaji.
While the origin and extent of the fake drugs in Africa in the current discoveries needs to be investigated, a 2011 report by the World Health Organisation (WHO) suggests that Indian firms that supply medicines from WHO pre-qualified facilities, are the source of quality drugs, not substandard ones. The report does mention the high presence of substandard drugs in Africa, however, these are mostly manufactured domestically.
“Low failure rate was specifically observed for imported products manufactured by established globally acting manufacturers and for products pre-qualified by WHO. The total failure rate of samples of WHO pre-qualified medicines was below 4 per cent and observed deviations were not critical,” the report said, adding, “This establishes WHO pre-qualification as the effective mechanism for assuring the quality of procured medicines.” The survey covered selected antimalarial medicines circulating in Kenya, Tanzania, Ghana, Ethiopia, Cameroon and Nigeria. And leading domestic pharma firms such as Cipla, Ipca Laboratories, Ajantha Drug House and Strides Arcolab which supply WHO pre-qualified antimalarial medicines to Africa.
In spite of the alleged one-third statistic, the WHO report said its survey outcome was not alarming.

“Although the survey results indicate relatively high proportion of antimalarials that are out of specifications set up in recognised pharmacopoeias, outcomes should not be generalised as catastrophic,” the study said, adding that “observed quality failure rates cannot be always directly related to therapeutic failures of these medicines.”