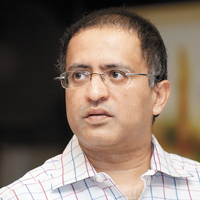 
In response to a questionnaire from BW, OnMobile merely said, "...the review has identified some weaknesses in the established governance mechanism with respect to certain contracts in the recent past including one with a related party. Strong alternative controls have ensured that the company did not suffer any financial loss." It also said there would be no restatement of the company accounts.

Even as a paper quoted union corporate affairs minister Veerappa Moily as saying that his ministry would look into allegations of financial impropriety at OnMobile, the company said neither the Serious Fraud Investigation Office or any other wing of MCA had got in touch yet.

Crisis seems to have been brewing for months. Two chief financial officers, Rajesh Moorti and Amit Rastogi, had left the company in less than six months. Then came the exit of the head of mergers and acquisitions, Sandhya Gupta. Head of Latin America operations Sandeep Ganguly and Pratapa Bernard, Head of Marketing and Products, were the latest to resign from the company.

Meanwhile, 60 per cent of the board, which was there when the company went public in 2008, had resigned, including prominent names such as Sridhar Iyengar, ex-KPMG India CEO, Vikram Kirloskar, vice chairman, Toyota Kirloskar Motors, Jayant Varma, an IIMA professor, and Sanjay Bhambri, who used to head sales at OnMobile. Commenting on senior-level exits, OnMobile says, "Departures were due to performance reasons, better opportunities and organisation changes during the growth phase."

A former employee who did not wish to be identified says, "If you look at page 59 of the draft red herring prospectus filed at the time of the IPO in 2007-08, of the 12 key managerial personnel named in it, who the company had said were important for the future of the organisation, except for the current interim CEO, not one of them is with the company. Doesn't that say something?" BW could not independently verify this claim.

Harit Nagpal, CEO of Tata Sky and an independent director on the board of the company, denied that he had resigned from the company. "I intend to be there." He, however, refused to discuss details of what had transpired at the board meeting where Rao is supposed to have resigned. He merely said: "The company will have to respond to other issues."

From  Good To Bad
OnMobile has an impeccable pedigree. Incubated in 2000 within Infosys Technologies as OnScan Technolgies, it was spun off from Infosys where co-founder Chandramouli Janakiraman was the head of Internet products group. While Janakiraman focused on engineering, it was Arvind Rao, with a background in the private equity and securities industry, who emerged as the public face of OnMobile.

In 2000, India had some 10 million mobile subscribers; today, there are nearly 800 million. OnMobile was prescient in spotting this opportunity. It offered ring back tones, music, video, radio, voice SMS, missed call alerts, data backup and restoration and other value-added services. After a slow start, it managed to sign on every major telecom operator — Vodafone, Airtel, BSNL, Idea and Reliance — and several media houses.

By end 2007, it went public and listed its shares in February 2008. That year the company had a market capitalisation in excess of Rs 3,000 crore — nearly 12 times its revenues. In the last four years, its revenues grew at a compound annual growth rate of 24.07 per cent, and its net profit at 8.34 per cent. Growth in the domestic market suffered because of the Telecom Regulatory Authority of India's regulations and 3G offerings. Rao is credited with having foreseen this and helping the company grow its international revenues. Foreign revenues constituted about half of OnMobile's FY12 Rs 638 crore income.

The company's success story has, however, been sullied by allegations of conflict of interest with Riff Mobile, Mobile Traffik (a subsidiary of Riff) and Oskar Habitat, companies promoted by  Arvind Rao and Sandhya Gupta. While Rao did not respond to a questionnaire from BW, Sandhya Gupta could not be contacted. Though OnMobile admitted to "weaknesses in the established governance mechanism".

Neville Dumasia, advisory partner and national risk leader at E&Y, while refusing to comment on the issue, says, "If a CXO level person commits intentional fraud, it is extremely difficult to catch even for a vigilant board."  Shalini Urs, chairperson of MYRA School of Business, says OnMobile needs to reveal why the CEO had to depart. "Otherwise, there will always be a cloud hanging over it."

The controversy has started hurting OnMobile. Analysts Karan Mittal and Anil Shenoy of ICICI Securities have warned investors that "while fundamentally the company continues to do alright, we advise our investors to exit the stock on the back of management concerns". With declining average revenue per unit, and a 3G rollout, OnMobile needs to clean up its act. Janakiraman has a task cut out for him.