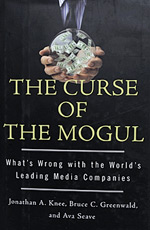 Shaped by classroom discussions at Columbia Business School and backed by rich data on markers of efficient management and success, the book makes an in-depth journey into the core processes of top American media conglomerates to ascertain the reasons behind a collective write-down of over $200 billion from the balance-sheets since 2000 (peak of the Internet boom). The study lists overpayment towards acquisitions, investments and contracts as one of the main reasons for the write-downs.

The authors have repeatedly questioned the rationale behind huge acquisitions in an unconnected business segment where barriers to entry are either scarce or too low. The oft-flaunted "strengths" of having deep pockets, possessing famous brands, owning an envious talent pool and being the first mover fall flat in the face of well-researched data on market/consumer reaction.

When the Internet era dawned, many moguls like Rupert Murdoch made lofty claims that it would only help them maximise revenues and expand capacities. To this, the authors say, "We can identify no incumbent media business for which the introduction of the Internet strengthened a pre-existing competitive advantage." In this connection, the book finds the distinction between old economy and new economy companies as something "increasingly artificial". It goes on to say that "one of the lessons of the original Internet boom is that the ability to harm an incumbent business does not in itself suggest an ability to sustain an attractive alternative model".

The authors have questioned the media moguls' usual argument that "content is king". They say precious content is rare to come by. "The owners of this kind of precious intellectual property have dominion over our most sacred memories… On the consumer side, the reasons why content is not king echo the reasons why talent is not a sustainable competitive advantage."

Most of the times, moguls boast of owning "strategic" content or making a "strategic" investment. The word "strategic" loses its meaning in a market scenario where there are lower or no economies of scale advantage. If a company produces the same content which its rivals also do, then where's the question of the content being unique or strategic. Huge investments made towards producing or retaining such content will only translate into lesser returns or losses.

To qualify as being strategic, content has to be unique, creative and continuous in nature since the businesses of television, radio, music, films and books cater to a vast customer base on a daily, weekly, seasonal and annual basis. That's where the need to own rare impeccable talent comes in. Even here, the performance of a manager, studio artist or musician may not be so consistent so as to produce stable, continuous creative content for a longer tenure. These are the soft spots where content, for sure, fails to be the king. It may be the king one day, closer to being the king the next day, and far from being considered for the role on a different day.

Since content and talent are closely connected and prove to be the same commodities that most media companies own, the dynamics of the market have to be redrawn by a re-look at the sources of comparative advantage. In a competitive market, where there are few players with the same interests and products, sharing of comparative advantage is recommended. Players who do not enjoy any barriers to entry should consistently focus on building higher efficiencies, while those who have a comparative advantage should work towards reinforcing that advantage.

In the final analysis, the book packs quite a punch by identifying the good and the bad moguls. It singles out bad acquisitions as the sole reason for underperformance of the media sector. In this section, the authors have analysed M&A deals featuring Comcast, AT&T, Vivendi, Universal, AOL, Time Warner and the likes. The book's not just about the darker side of the media sector. It lists the positives as well. But then, the curse still remains.

The book, which contains sector-wise research on some of the well-known businesses in the world, will serve as a brilliant guidebook for management students, managers, investors and even the moguls.