Consumer Is King; SC Clears Hurdles For FDI In Retail 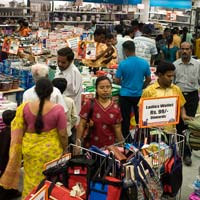 08 November, 2014
Print this article Font size -16+
The Supreme Court today cleared the hurdles for the implementation of FDI in multi-brand retail sector saying that the "consumer is king and if that is the philosophy working behind the policy then what is wrong".

The apex court said the policy aimed at "throwing out" the middleman, who are "curse to Indian economy" and "sucking" it, has to be "welcomed".

A bench headed by Justice R M Lodha said the policy does not suffer from any unconstitutionality or illegality requiring it to be quashed.

"This court does not interfere in the policy matter unless the policy is unconstituional, contrary to statutory provisions or arbitrary or irrational or there is total abuse of power.

"The impugned policy cannot be said to suffer from any of the vires," the bench, also comprising justices Madan B Lokur and Kurien Jospeh, held while dismissing a PIL challenging the notification on the FDI in multi-brand retail sector.

Before pronouncing the order, the bench said the policy was for the benefit of the consumer, farmers and the retailers with the objective to eliminate middlemen.

"The middleman is a curse to Indian economy. They work as sucker and they have to be thrown out and that is the object of the policy and you have to welcome it," the bench said and added that the policy would bring choice for the consumers who are the real king.

The bench in its order said "it is thus left to the choice of state governments whether or not to implement policy to allow FDI upto 51 per cent in multi-brand retail".

It rejected the contention that Departement of Industrial Policy and Promotion (DIPP) under its business rule was not empowered to make policy pronouncment.


The apex court further said there was no merit in the contention that the Centre has no authority to formulate FDI policy and the PIL filed by advocate M L Sharma has to be dismissed as "there is no challenge to the amendements in Foreign Exchange Management (Transfer or issue of Security by a person, resident, outside India) Regulation, 2000), by which FDI in multi-brand retail sector was allowed.

While upholding the policy, the bench said, "We have carefully considered the submission made by petitioners and the challenge is not founded on any material".

During the hearing, the bench said the policy of FDI in multi-brand retail was discussed and debated in detail in both Houses of Parliament before it was voted in favour of the government.

The bench noted that the policy was prepared after detail study of the economy of developing countries like China, Brazil, Argentina, Singapore, Indonesia and Thailand where FDI is permitted upto 100 per cent, local retailers co-exist along with organised retail and are integral in the organised retail chain.

In the order, the bench accepted the submission made by the Centre in its affidavit in which it said that the decision to allow FDI in multi-brand retail is a policy formulated by the Government of India in conformity with FEMA 2000.

While formulating the policy, the primary focus was to benefit the consumer by enlarging the choice of purchase at more affordable prices and by eradicating the traditional trade intermediaries/middleman to facilitate better access to the market (ultimate retailer) for the producer of goods.

The affidavit had said farmers will also benefit significantly from the option of direct sales to organised retailers.