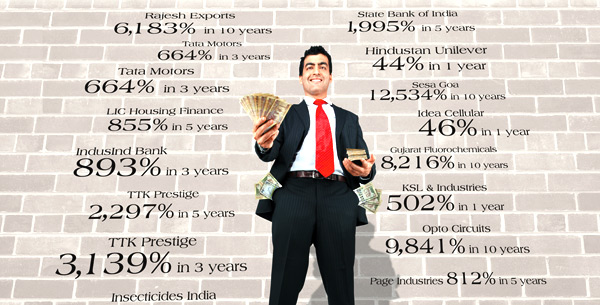 The Standouts
Three sectors stand out: consumer goods, financial services and natural resources. In the former, it was not marquee names you would see, but the lesser known ones, like TTK Prestige, a kitchenware maker, and Page Industries, which makes underwear, that topped. In financial services, banks were dominant. HDFC Bank stood out on every list. IndusInd Bank, Kotak Mahindra Bank and Yes Bank showed a good business model backed by solid and imaginative management produce consistently high returns.

The natural resource business has benefited from the very low levels that commodity prices were at in 2003. Sesa Goa is one example, but there have been others: metals companies, mining companies and companies that have commodities at the core of their business.

That said, financial services in a fast growing economy are always among the best investments. Some so-called public sector banks made the list in some cases, but the logic was the same: solid, but nimble management. State Bank of India made the list too, but its troubles might set it back a little.

As one would expect in a growing economy, most of the returns get reinvested to sustain momentum. That has been validated by dividend performance across the board, with very few exceptions. Similarly, bonus issues — think of them as stock dividends — have also been a little lacklustre. The story of IPOs is a familiar one: a big pop at the beginning, and then mostly a rapid fading away.

Will these companies be able to sustain the returns they have achieved over the next two years? One of the striking aspects of this survey is that even after the global crisis of 2008 and its aftermath, the good companies continued to do well in return terms. So, even if conditions don't look too good for the next two years, chances are that they will find ways of maintaining their track records.

Here are a few characteristics that have emerged among businesses that have topped our return charts. One, they all have solid managements that are sharply focused on business development and expanding marketshare. Two, they can raise capital relatively easily and at a good price. Three, they are in mostly customer-facing businesses. They understand customers and pay attention to customer service. In carrying out this survey, it has been our endeavour to separate the wheat from the chaff. Next year, when we revisit this survey, we will know if we have. That said, you, dear readers, can tell us that now.

Stock investments are subject to market risks. Investors are advised to exercise caution.