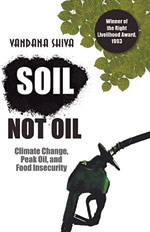 She rages, she rants, she performs a marvellous Tandava with words. In this slim volume, Vandana Shiva vents her fury on the globalised fossil-fuel addicted world that has orchestrated the dance of destruction of Earth. Shiva's take on climate change and its attendant worries — the energy crisis and food shortage — is relevant and attention grabbing. As she says grimly, "There is no place to hide."

In the first chapter, on the politics of climate change, she minces no words in rejecting the solutions that the developed world has come up with. Sneering at carbon trading, for instance, she writes: "Creating a market in pollution is ethically perverse… Instead of defending the rights of all citizens to clean air and climate security, emissions trading defends the rights of corporations to pollute the atmosphere and destabilise the climate." Similarly, the US-India nuclear agreement offered as a "clean energy" agreement comes in for scathing criticism as do technological fixes employed by the West.

Shiva says, the car has replaced the cow as the sacred symbol of India. "Are we producing food for cars or human beings?" she muses.

A strong champion of localisation, the author concludes with an appeal to unleash "Shakti", the creative energy of the universe, that, for her, lies in building small, self-sustaining communities. This is the weakest link in the book. While she may be forgiven for condemning all the formulae offered by the West, her own solution is too simplistic. It appears to lie in literally going back to the bullock cart era. Repairing the horribly fractured earth is not that easy.