Bhubaneswar (Odisha) [India], February 15 (ANI) Odisha Congress workers on Monday sat on 'dharna' and participated in 'rail roko' agitation at Bhubaneswar railway station as part of the party's six-hour-long state-wide bandh to protest against the fuel price hike.
Congress MLA Sura Routray, who led the 'Rail Roko' protest, told ANI, "Under the Narendra Modi government, diesel rate is Rs 100 per litre, petrol 100, gas rate has been hiked by Rs 50. This is why Congress has called for a peaceful bandh' from 7 am in the morning to 1 pm. The bandh is successful as trains, busses, other public transport did not operate, and markets were closed today." 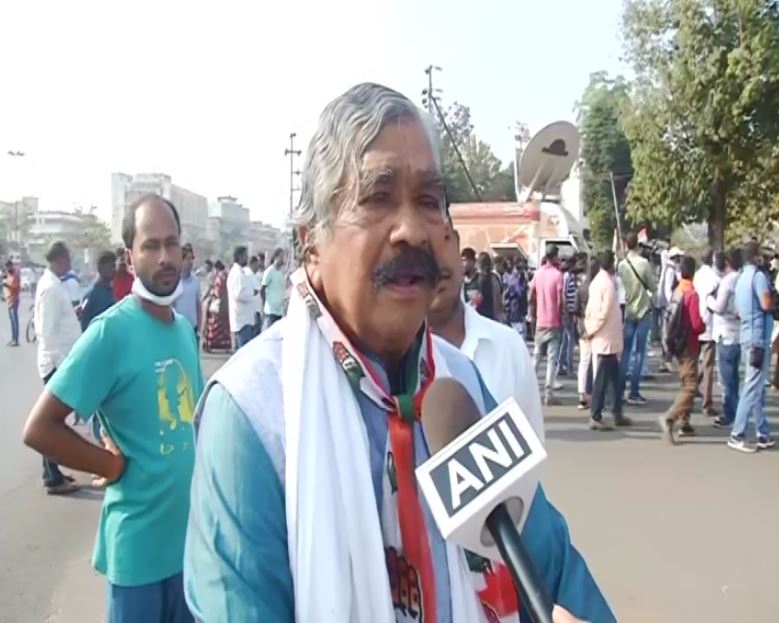 "This is to show Narendra Modi that since you have increased the rates of petrol and diesel, we had to resort to riding cycles. If the PM also starts cycling he will get to know what problems the common man faces when fuel prices go up," he added.
The prices of petrol and diesel in Bhubaneswar stand at Rs 89.69 per litre and Rs 86.47 per litre respectively.
A resident of the city speaking to ANI said, " It is all political drama which does not benefit the people, instead, it only creates problems for them. The political parties should protest peacefully or stage dharnas outside government offices but harassing people in the name of a bandh is no solution to any problem. Keeping the capital city at a standstill is not wise and protesting through bandhs is outdated."
"We had to go to Kolkata but no reservations are available, buses are also not operating. We are facing difficulty since morning due to unavailability of public transport. Transport that is available is charging a lot," Sudeep Biswas, a student, said.
Another student who had to appear for an examination in another city said that he had been waiting to get suitable conveyance but had failed to do so since morning, adding that due to the bandh he was unable to get something to eat as all stall and shops were closed.
Petrol and diesel prices have gone up in the national capital and stood at Rs 88.99 per litre and Rs 79.35 per litre, respectively on Monday. The price of liquefied petroleum gas cylinder (14.2 kg domestic cylinder) also increased by Rs 50 per unit yesterday, it will cost Rs 769 in Delhi from today. (ANI)