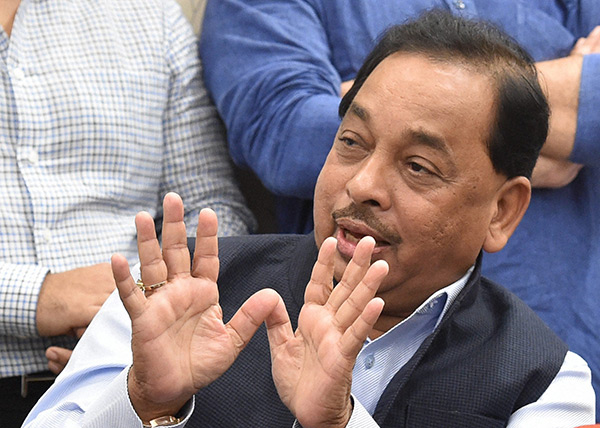 Sulking senior Congress minister in Maharashtra Narayan Rane on Monday met Chief Minister Prithviraj Chavan, gave his resignation and later slammed him for "slackness" in decision-making. He does not want to be a "partner in defeat" in the assembly elections due later this year, he said.

Similarly, another senior Congress minister in the Assam government Himanta Biswas Sarma met the state Governor and submitted his resignation. He claimed he met the Governor along with 38 MLAs and expressed non confidence in the Chief Minister. Assam goes to polls in less than two years.

Coming two months after Congress debacle in the Lok Sabha elections in both the states, the back-to-back developments have raised questions on the strategy the Congress high command and Rahul Gandhi propose to adopt to stem dissidence.

Congress leaders in Delhi, however, ruled out suggestions that it was a revolt by state leaders against the leadership of Rahul Gandhi.

Both the ministers had resigned once earlier but were persuaded to withdraw it. Sarma said this time he would not withdraw the resignation and made it clear that he would not contest elections under Gogoi's leadership.

Addressing a news conference after submitting his resignation, Rane, a bitter critic of Chavan and an influential leader from Konkan region, mounted a scathing attack on the chief minister, accusing him of slow decision making and lack of control over administration.

"Decisions relating to the people's works are not taken quickly. There is no control over administration. The slow administration affects people's work and dissatisfaction was manifest in Lok Sabha polls," Rane said, adding, "I don't want to be a partner in the defeat in the assembly polls and that's why I have quit."

Rane, an aspirant for CM's post for long, also expressed his displeasure with Congress' central leadership.

"I was told I will be made CM in six months. But in nine years the promise has not been kept," Rane, who has been publicly claiming he was assured of chief minister's post when he quit Shiv Sena to join Congress in 2005, said.

"Not a single associate who came with me to Congress was made legislator," Rane, a former Shiv Sena chief minister, said. He, however, said he would not leave the Congress.

"The CM has informed me he will speak to Sonia Gandhi and revert to me. I will announce my next move after that," he said.

"I have submitted my resignation as minister to the Governor (J B Patnaik) as I have protested Gogoi's leadership," he told reporters after putting in his papers at the Raj Bhavan.

"About 38 MLAs went with me to the Raj Bhavan but it was my private journey. I have no confidence in Tarun Gogoi's leadership. We are fighting for our party and under Gogoi's leadership Congress will come down to single digit in 2016," he said.

"Absolute madness prevails and there is no direction under Gogoi. Continuing under Tarun Gogoi is not feasible politically, mentally and physically. It is not advisable.

That is why I decided to resign. I will also send my resignation to the Chief Minister," he added.