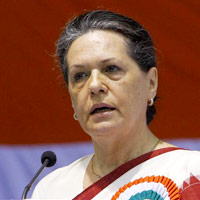 08 November, 2014
Print this article Font size -16+
In a frontal attack on the Narendra Modi government, Congress President Sonia Gandhi on Wednesday (13 August) said there has been an "alarming increase" in communal incidents since it came to power and asked partymen to resist its "authoritarian and sectarian" tendencies.

"It is our task to play the role of a vigilant Opposition, to stand up for the values and policies of the Indian National Congress, and to resist the authoritarian and sectarian tendencies of the new government as it tries to get its way in Parliament.

"This we have begun to do, I believe, with increasing effectiveness," Gandhi said addressing the second meeting of the Congress Parliamentary Party in the new Lok Sabha.

Stepping up her attack on the BJP on communalism, she alleged that since the BJP has come to power there has been an alarming increase in number of incidents of communal violence.

"We have had hundreds of incidents of communal violence and rioting in Uttar Pradesh, in Maharashtra and a number of other States. In addition, there have been other subtle but pernicious signals of intolerance," Gandhi said telling the partymen "our work is cut out for us."

She acknowledged that "It has been a challenging time" for the Congress party.

But at the same time, she noted "the process of rebuilding and restoring the confidence of the public in the Congress Party has begun."

"We have been reduced in numbers to an all time low in the Lok Sabha. But we have not been reduced in spirit," Gandhi said telling the partymen that the work of Congress is in Parliament, in public forums across the country, in our media and in the streets and homes of ordinary Indians everywhere.

With Congress still not getting the post of Leader of Opposition in Lok Sabha apparently weighing on her mind Gandhi said, "but Parliament is not the only forum available to us.

If each of us has to be an effective Congressman and woman, we must also work to maintain and strengthen the grassroot connections to the voters that has brought us here."

Gandhi also accused the Modi goverment of "stealing" the ideas of UPA and "borrowing" its programmes as it has "nothing new to offer".

"The lesson of these ten weeks is that the BJP has nothing new to offer the country. They attacked us without principles and they are now governing us without policies.

"Imitation is the sincerest form of flattery. Let them even continue to blame us for their own failures, as they have been doing," she said.

Attacking the government over issues including price rise and unemployment, the Congress President said,"Prices are rising across the nation, hurting the ordinary housewife, the college student, the worker, and particularly the unemployed and deprived.
break-page-break
"How long will they be able to blame UPA government for your inability to control or improve the economy? Such excuses have a short shelf life."

Gandhi said that the new government also tried to prevent a discussion on Gaza in Parliament and then ended up voting at the United Nations Human Rights Council just as the UPA would have.

"They have also, finally, seen the wisdom of our Government?s initiative in trying to reach a land boundary agreement with Bangladesh which, you will recollect, they had refused to support last year."

Touching on the incidents of rape she said that women, too, have much to be concerned about, judging by the evidence of BJP rule so far.

"Violence against women is rampant, and increasing.

I do not need to repeat to you the growing number of rapes, sexual assaults and even killings of women that have occurred on the BJP?s watch," Gandhi said.

The Congress President also flagged the "atrocious behaviour of some BJP legislators and the unacceptable views expressed by others in complete disregard of our time-honoured secular traditions and constitutional propriety".

"Let us be clear. There is a great deal of concern throughout the country, particularly among women and minorities, the poor, about whether the BJP and its sister organisations mean to work for all of India?s communities, or whether they seek to profit from dividing the nation on sectarian lines.

"In my mind, I have no doubt about the answer... The moment BJP betrays the ideals on which this nation was built, the moment they pursue politics of division and hatred, the moment they try to behave dictatorially inside or outside this temple of Indian democracy ? the moment they do any of these things, we will stand up and fight them," she said.

"This is the tendency we must resist with all our strength. Our work is cut out for us. As we leave this Parliament and prepare to return to our constituencies, let us take the message to our voters that the Congress Party stands resolutely with the people of India.