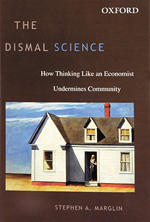 Stephen Marglin is a trained economist. It has taken courage on his part to defy conventional wisdom in writing The Dismal Science (Oxford University Press). The book works as a critique of mainstream consensus that a system of unfettered markets is good for the people. For Marglin, community-based economics would serve humanity better. What traditional economists call ‘universal truths', Marglin terms ‘cultural myths'. He is, therefore, a critic from the inside exposing problems in economic theory and practice, but only to bat, without success, for community-based thinking.

Marglin could have hit harder on the problems with the foundational assumptions of economics.  Instead, he ignores the market reality that capitalists generally operate fettered by cronyism, unfair taxes and corrupt governments, and not free and fair markets. This is partly true. But human nature adapts as best as it can to circumstances forced upon it by policymakers and industrialists, who take heart from the flawed theories of conventional economics.

So, are there alternatives to conventional economic wisdom? Marglin shows the community way. In fact, any system run by humans will not be free of the negatives such as manipulation, greed, deception  and exploitation. Still, it is also to Marglin's credit that he is fair to mainstream economists in stating their positions without distortion of any kind, a convincing platform from which to launch his criticisms.