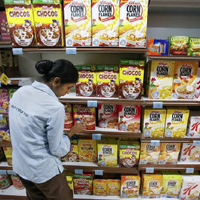 08 November, 2014
Print this article Font size -16+
Global markets traded firm in the last fortnight on expections that the central bankers of major economies like the US and China might adopt stimulus measures to boost growth. Furthermore, expectations that European leaders might take steps to curtail the eurozone debt also created upbeat market sentiments. This led to a rise in risk appetite and a decline in the demand for low yielding currency i.e. the US dollar index (DX). Result: an upside in commodity prices.

Spot gold prices increased by 3.1 per cent taking cues from the firmness in global markets.  The weakness in the DX also acted as a supportive factor for rising gold prices. In the domestic markets, MCX gold prices rose 2.7 per cent touching a historical high of Rs 30,899/10 gms due to depreciation in the Indian rupee.
Spot silver prices registered maximum gains in the non-agri space of around 9.6 per cent eyeing firmness in spot gold prices, strength in the base metals pack and weakness in the DX. In the domestic markets too, MCX silver prices surged 6.5 per cent and settled at Rs.56,971 per kg after touching a high of Rs 57,024 per kg on 24 August.
The base metals pack traded on a positive note as LME inventories declined along with expectations that European finance ministers will take steps to solve euro zone debt crisis. Weakness in the DX also acted as a positive factor for the prices.
Copper prices gained by more than around 2 per cent on a fortnightly basis on the back of upbeat global market sentiments coupled with weakness in the DX. The 2.4 per cent decline in LME copper inventories supported the upside in the prices. In the Indian markets, prices increased by 2.7 per cent as a result of depreciation in the rupee and closed at Rs 425.90/kg on 24 August.
Nymex crude oil prices gained around 3.5 per cent taking cues from more than expected decline in US crude oil inventories, tensions in Middle East which led to supply concerns coupled with weakness in the DX. Additionally, expectations that three storms are building in the Caribbean Sea which will enter Gulf of Mexico also supported upside in the prices. In the domestic bourses, prices rose 4.7 per cent as the Indian rupee depreciated.
Outlook
In the coming fortnight we expect precious metals, base metals and crude oil prices will remain volatile ahead of the Federal Reserve meeting at the end of the month on August 31, 2012 and outcome of the meetings held by the European leaders to resolve the Euro zone debt crisis. Amidst rising uncertainty in the global markets, gold prices in particular are likely to head upwards in the coming fortnight. Weakness in the DX might also support an upside for the non-agri commodities. Crude oil prices might take cues from the developments with respect to the Middle East tensions, decline in the US crude oil inventories along with any build up of hurricanes and progress in the Gulf of Mexico region thereby disrupting supplies may provide support prices on the upside.  In the domestic markets, depreciation in the Indian rupee may, however, support an upside in the prices on MCX.
Agri Commodities
Sentiments remained cautious for most of the Agri commodities during the last fortnight on uncertainty over monsoon and thereby concerns over next years productivity. Rains in the month of August have recovered significantly compared to the last two months and thus average deviation from long period average which was around 22 per cent till July is now narrowed down to around 14 per cent below average. This has also been mirrored in the sowing figures of Kharif crops where the gap has narrowed significantly with acreage so far down by only 6 per cent compared to last year.
Among the oil complex, ref soy oil and CPO gained 2.6 per cent and 2.8 per cent, respectively, on expectations of possible return of El Nino in south East Asian nations that would hurt palm oil output in top producing nations. However, gains in soybean were comparatively lower on improved rains over soybean growing states and increase in area under cultivation by 4 per cent at 106 lakh hectares, thereby raising hopes of better output.
Spices witnessed mixed trend with Turmeric posting gains of around 4.6 per cent amid concerns over lower acreage and poor yield while Pepper and Jeera declined by 4.9 per cent and 5 per cent respectively on account of lacklustre overseas demand. Uncompetitive domestic pepper prices have turned buyers towards Indonesia and Brazil. Improved rains and hopes over better sowing coupled with weak overseas demand have exerted pressure on the Jeera prices.
Grains complex witnessed a significant jump in the previous fortnight with wheat witnessing highest gains of around 13 per cent as prices rose in international markets, making exports attractive for the domestic exporters. Maize price continued with its upward trend amid US drought that has hit the corn crop.
Kapas declined marginally during the last fortnight on account of improved rains that raised hopes of better sowing and yield. Area as on 24th August under cotton stood at 111 lakh hectares, down by 5.2 per cent compared to the same period last year.
Sugar prices declined on account of improved supplies after government released additional quota to meet the festive season demand. Also, ISMA kept its initial output estimates for 2012-13 unchanged at 25 mn tn and estimated higher ending stocks, thus pressurizing prices.
Chana, made a new high during the initial week of the fortnight amid tight supplies of the pulse crop. However, prices declined sharply last week as good rains in the past 2 weeks have led to improved sowing prospects.
Outlook
With better rains in the domestic markets, we expect prices to consolidate around the current levels. However, September rains are crucial which are forecast to remain below average. If the same happens, prices may again bounce back and vice versa. Edible oil complex may not decline much amid supply shortage in both the domestic and global markets. Gains on the other hand, would continue to trade firm amid firm international markets that are making exports attractive. Strong fundamentals in the global markets may cap the upside in domestic cotton and sugar prices. Spices would remain under downside pressure amid weak overseas demand.
(The author is Associate Director, Commodities and Currencies, Angel Commodities)
Tags assigned to this article:
exclusive to web commodities copper wheat silver gold dollar nymex mcx eurozone lme naveen mathur commodities corner angel commodities agri commodities maize othertop2 non-agri commodities dx