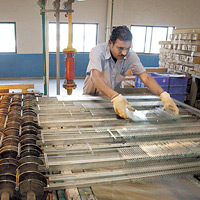 08 November, 2014
Print this article Font size -16+
The International Monetary Fund (IMF) feels India’s economy looks like it will have a better spell in 2013 compared to the year it just left behind. In its latest report on the world economic outlook, the global lender said that India would grow at a faster 5.9 per cent in 2013. This is a little lower than its October estimate of 6 per cent. It also said that the country could grow 6.4 per cent in 2014. It, however, lowered the growth forecast for the past year to 4.5 per cent from the 4.9 per cent it earlier estimated. A week ago, the World Bank also said that India’s economy would grow at 6.4 per cent in 2012-13, up from a projected 5.4 per cent. Overall, the IMF is optimistic about global growth in 2013. It said economic conditions improved  in the third quarter of 2012, with global growth increasing to about 3 per cent.
Double Jeopardy
Debt-hit Rcom shocked investors by posting a 44 per cent dip in consolidated net profits for the quarter ended
December. Profits of the third-largest cellphone operator in the country fell to Rs 105 crore from Rs 186 crore a year ago. On 24 January, the Anil Ambani-controlled operator’s stocks fell over 9 per cent on the Bombay Stock Exchange.
Cornor Room Chatter
Azim Premji said that his son Rishad would never become the CEO of Wipro, the IT major he steered to success. Speaking on the sidelines of the World Economic Forum in Davos, Premji said his son would represent promoter ownership on the company’s board. Rishad, who joined Wipro in 2007, is currently the chief strategy officer of Wipro. Premji personally owns 3.7 per cent in Wipro, while entities linked to him hold over 74 per cent.
Taking Off
In a reverse swoop, SpiceJet posted profits of Rs 102 crore for the December quarter, compared to a loss of Rs 39 crore a year ago, thanks to increased airfares. Its revenues rose 37 per cent to over Rs 1,600 crore.
FIIs On A Binge
It’s a record. Till 22 January, foreign institutional investors or FIIs bought stocks worth $2.67 billion (about Rs 14,300 crore). This is the highest figure ever since FIIs were allowed buy equities in 1993. Meanwhile, the RBI has barred FIIs from buying shares in Pantaloon Retail, after the Kishore Biyani-promoted firm crossed the overall limit of 24 per cent of its paid-up capital.
In For A Shock
India’s electronic product makers are likely to face a gloom soon. A report by India Semiconductor Association and researcher Frost & Sullivan says high value-added manufacturing could shrink 6.7 per cent in revenues by 2015 and local manufacturers might lose out a whopping $200 billion in potential revenues during 2011-15.
In OS Fray
Can the newly launched Firefox operating system (OS) post a strong challenge to Android and Apple’s iOS? The open-source mobile OS from Mozilla will feature in two smartphones to be launched within a few weeks. A firm called Geeksphone will manufacture the gadgets.
Getting Better
Rating agency India Ratings and Research (Fitch) says the number of dud loans of Indian banks may fall in the second half of 2013, thanks to an economic recovery.
Shedding Stake
Insurance major LIC has cut its stake in drug maker Dr Reddy’s to 6.31 per cent by selling shares worth Rs 875 crore in the open market.