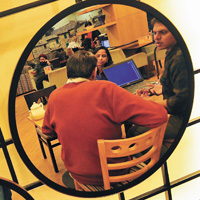 For college goers, too, social media is a distraction. It is not unusual to find teenagers hanging out together, but engaged in their virtual conversations
with online pals through their phones. "Handhelds are used rampantly inside the café," agrees Café Coffee Day's (CCD) president (marketing), K. Ramakrishnan.
So, is life coming a full circle for CCD? When CCD launched in Bangalore in 1996, it was more of an Internet café. Consumers walked in mainly to surf the
Internet, and sipping on coffee was just incidental. Is it going back to the old times? Yes and no, says Ramakrishnan. He agrees that the Wi-Fi at CCD is a
draw for most youngsters, but adds that it's just one more reason to hang out at CCD unlike in the past when Internet was the mainstay. To cater to needs of
the online generation, about 150 of the 1,070 outlets of CCD are Wi-Fi enabled.
Others are a bit wary. Says Costa Coffee's CEO Santhosh Unni: "We don't have Wi-Fi in our outlets, as it induces the consumer to spend more time inside the
outlet." What he implies is when consumers spend more time inside outlets, it does not necessarily lead to larger spends per customer. And Costa Coffee,
which started its India operations in 2005 and has less than 100 outlets, prefers to have a faster turnover (more customers per seat on a given day). That's
important at least for Costa Coffee, because most of the 40 outlets that it opened in its first four years of operations in India were fairly small in size
with only about 15-25 covers (seats). So it is likely that there will be other customers waiting, because your existing customers have finished their coffee,
but not finished checking out their favourite websites. Unni adds that introducing Wi-Fi makes sense when a chain has bigger stores to accommodate large
customer walk-ins during the peak hours. "When you have larger stores, you can start looking at Wi-Fi to induce the customer to stay longer. But, yes, we
would love the customer to stay as long as he continues to spend," he says.
Others such as Barista Lavazza have another concern. The coffee chain has about 15 per cent of its stores with Wi-Fi connectivity. But it has been gradually
cutting back on the outlets with Wi-Fi connections because of the unsecured cyberspace being misused by terrorists. For example, the Barista outlet in
Mumbai's Phoenix Mall, which is currently under renovation, no longer offers free Wi-Fi to its guests.
Consultants such as Landor Associates' Lulu Raghavan point out, "The coffee café space has potential to be a lot more than what it currently is." To be sure,
there have been experiments even in India. Barista in its early days in India even experimented with Bancafe's (café inside a bank) by tying up with ABN
Amro, or bookstores inside café's among others. Internationally, Starbucks retails music inside its stores.
Raghavan, who has been associated recently with the rebranding of CCD, is not talking about that. Coffee bars are emerging as the new hotel lobby, and in
some cases, as the office space. That's because with increasing security concerns, five-star hotels are increasingly keeping out the visitors who used the
five-star lobby as their office space. Coffee bars in prime locations have now taken over the role of being a ‘coffice'. For instance, Costa claims to have a
significant number of guests who enter at 9'O clock and leave at five in the evening. The math is simple. An office space at any upscale commercial location
in the big metros would set you back by Rs 30,000-40,000. For start-ups who operate on a phone and a laptop, the coffee shop is the right place to park
themselves.
CCD's larger format outlet called Coffee Day Square in Bangalore offers what it calls "huddle rooms". The rooms are used for brainstorming sessions, job
interviews and so on — of course, there is a continuous supply of coffee and snacks while your meeting is in progress. But CCD's Ramakrishnan is non-
committal if that idea will be extended to other cities as well. Other international chains such as Gloria Jean's, for instance, feel that personal spaces
inside a café are the way forward. As outlets get bigger in size, consumers can expect more and more such offerings, say industry insiders.
One way chains are using the social network to their advantage is by using these platforms to drive traffic into their outlets. CCD, for instance, is
experimenting with social networks like Foursquare where ‘Mayors' (users who have often visited a particular location) get special privileges at CCD outlets.
The chain is even using its nearly 0.5 million fan base online (both official and unofficial groups on Facebook) to get recommendations on menu restructuring
and other issues.
For instance, among the desserts served at CCD, its Chocolate Fantasy was well received; there were not enough takers for the mousse. CCD put up about eight
offerings online ranging from low-cal desserts to fruit-based desserts to research what kind of healthy desserts consumers would vote for. To its surprise,
consumers decided to give most of the health offerings a thumbs-down and instead suggested a dessert that would contain even more chocolate that the best-
selling Chocolate Fantasy. The company has now added that suggestion in its menu, though it has decided to offer healthier variants too, just in case someone
asks for it.
Raghavan recommends enhancing the digital experience inside coffee bars with touchscreen devices on tables and so on, where café's could put up interactive
touchscreens on tables that can beam personal messages on to large screens at the outlet. And you may soon see customers such as Entwistle browse through
their magazines on the tablet screens. And, of course, leave them behind.prasad(dot)sangameshwaran(at)abp(dot)in