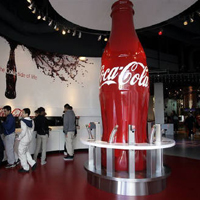 08 November, 2014
Print this article Font size -16+
Coca-Cola has put in place a new operating structure in India and south west Asia in keeping with its business priorities. This will come into effect from October 1 and follows Coca-Cola India's plans to invest $5 billion in India by 2020.

Neeraj Garg, currently VP, company owned bottling operations (CBO) in India, will assume the responsibility of the SWA region as well as the juice business. Both these executives will report to Atul Singh, president, Coca-Cola India and South West Asia Business Unit.

Announcing the realignment, Atul Singh said: “India is one of the key growth markets for The Coca-Cola Company and the business unit’s role is critical to the company for achieving its 2020 Vision. We have been growing for the last 24 quarters and the India market is now amongst the top seven markets for the company. As we move into the next phase of our journey, we have a solid foundation and necessary momentum in our business. This is the time to take the next step in our evolution. We now need to have the scale and resources to capture latent growth across the Business Unit. Also, keeping in mind the market realities, we need to be more responsive and have a sharper and deeper focus on our business. The new structure lends us stability and robustness and positions us well to capture the latent growth in our markets”.

“Kini and Neeraj are proven business leaders and I look forward to partnering with them and the rest of my leadership team, company owned bottling partner (Hindustan Coca-Cola Beverages Pvt. Ltd) and the franchise bottlers as we continue our journey towards our 2020 Vision”, added Mr. Singh.

Incidentally, Coca-Cola has returned to Myanmar officially after 60 years. The soft drinks giant also plans to set up a bottling operation in the country. Coke's rival reentered Myanmar after 15 yeears as the company takes advantage of eased US sanctions and moves forward with efforts to expand into emerging markets.