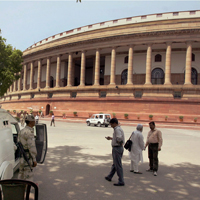 08 November, 2014
Print this article Font size -16+
The coal block allocation issue cast its shadow on Parliament for the eleventh day on 5 September paralysing proceedings with BJP remaining unrelenting on the demand for resignation of Prime Minister Manmohan Singh.

Lok Sabha and Rajya Sabha were adjourned till noon after opposition triggered ruckus on the issue and the Lower House adjourned for the day minutes after it re-assembled.

When the Rajya Sabha met at noon, a scuffle broke out between Naresh Agrawal (SP) and Avtar Singh Karimpuri (BSP) during introduction of a Bill seeking to provide reservation in promotion to SC/ST in government jobs.

The bill was introduced by minister of state for personnel V Narayansamy amid commotion due to the scuffle and slogan shouting by BJP on the coal block allocation issue.

As the unruly scenes continued, the House was adjourned till 2 PM.

Amid uproar over the coal issue in the Lok Sabha, members of the DMK, a constituent of the ruling UPA alliance, as also AIADMK were in the Well with DMK members holding placards against the upcoming visit of Sri Lankan President Mahinda Rajapaksha.

In the melee, the government withdrew the Securities and Exchange Board of India (Amendment) Bill, 2009 in Lok Sabha.