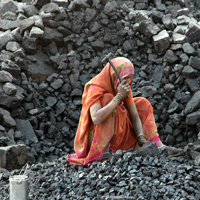 "Our unrelenting focus should be on domestic production," Coal India Chairman S. Narsing Rao said in an interview.

"Just because we have some money, (we) shouldn't really be focusing on something else (overseas acquisition). I simply have no time to even think about that."

The state-run miner, which supplies about 80 percent of India's coal, has been under immense pressure from its industrial customers and the government to increase output quickly after stagnation in the past two years has left many power plants running below capacity.

"Now the next 180 (million tonnes) has to come in five years, so you can see the magnitude of the challenge."

Opening new mines has been difficult for Coal India due to slow environmental clearances and politically sensitive land acquisition.

The company will invest in setting up a logistics facility at each existing mine to transport more coal and deploy bigger and more efficient equipment, Rao said.

When it comes to securing overseas coal assets, the miner is risk-averse, he said. "The public-sector DNA is very conservative."

Over the next six months, Coal India will identify coal assets in Africa and persuade the Indian government to negotiate deals to secure energy resources there, Rao said.

A negotiated deal by the government would bring in a safety net, given the resource nationalism in many countries, and the asset could also be procured cheap as it would not be competitively bid, Rao said.

Mature mining markets such as Australia and the United States, which have little scope for government-led deals, would be off Coal India's radar.

The company will also aim to acquire more than just a minority stake in overseas assets, he said. "If somebody is interpreting that (minority stake) also as securing energy, I'm afraid that is a totally disastrous definition of energy security."