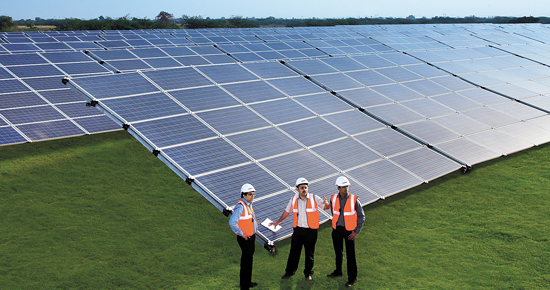 08 November, 2014
Print this article Font size -16+
The Indian solar industry is not headed anywhere, at least for the next couple of years. This was the unanimous view of experts at the recent Solar India 2012 Conference and Exhibition in Mumbai. They agreed that the industry had so far struggled to make headway despite incentives.
The Jawaharlal Nehru National Solar Mission, launched in 2010 with a target of deploying 20,000 MW of grid-connected solar power by 2022, is progressing at a snail’s pace, as per government data. So far, only 1,044 MW capacity has been installed; the target was to achieve 2,500 MW by December-end.
The government has also set a target of 10,000 MW of solar power during the next Five-Year Plan, which it is sure of achieving. It plans to incentivise and popularise the use of solar power instead of fossil fuels wherever possible.
These plans, however, seem ambitious. For instance, the government had sanctioned projects for 1,172 MW, but so far only 268.3 MW has come on stream. About half a dozen large solar thermal power projects totalling about 500 MW are running way behind schedule. The delays are because “suppliers are not delivering the equipment on time. There are only a couple of manufacturers and their order book backlog could be the reason,” says Tarun Kapoor, joint secretary in the ministry of new and renewable energy.
While cost disadvantages are blamed for slowing the pace of solar thermal projects, James Abraham, managing director and CEO of Sunborne Energy, believes it will be foolish to put solar power on the back-burner because of that. He says that solar power generation will be competitive in terms of price by the end of Phase 2 (2013-17). He adds that the choice between solar-thermal and solar photovoltaic (PV) projects should be the developers’.
Moreover, banks are reluctant to fund solar projects, which is acting as a deterrent for firms seeking to enter the solar industry. Says Kapoor, “This is generally due to the negative news flow related to the power sector.” Another problem is that most companies and state electricity boards have not been able to meet the solar power generation targets mandated under the renewable purchase obligations. The shortfall is around 30 per cent, says Kapoor, adding that the government “is planning to frame rules for penal action against defaulters”.
Poor financial health of PV-makers, globally,  is yet another cause of concern. “The cost of PV has crashed globally and, thus, most of the top 10 PV manufacturers across the world are in a bad shape,” says Sunil Gupta, global head of technology and cleantech at Standard Chartered Bank, Singapore.
One incentive that could help is the partial risk guarantee fund that would reduce the cost of borrowing by reducing the cost of hedging. Dollar financing has increased but currency volatility has increased the cost of this financing. While solar PV players have been cushioned because of the fall in price of panels, solar-thermal has been hit. “This will build an ecosystem for solar power and the market will grow automatically,” says Santosh Kamath, partner at KPMG.