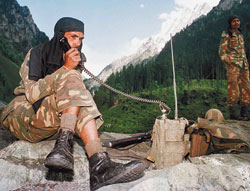 The Department Of Telecommunications (DoT) may find it tough to push through its proposal to set up a separate regulator for spectrum-related issues. The proposal indicates that DoT has little faith in its own wing Wireless Planning Commission (WPC), which has so far managed and allocated spectrum for commercial and security use over the past five decades.

"There is no need for a spectrum regulator," says Prashant Singhal, partner and telecom industry leader at Ernst & Young. "That would be necessary only if spectrum trading is allowed." DoT can revamp the spectrum management system when the National Frequency Allocation Plan (NFAP) is released every five years. But the last NFAP in 2002-03 was a failure as it only repeated the NFAP of 1994.

This would also undermine the role of the Telecom Regulatory Authority of India (Trai). "The aim is to expedite release of spectrum and manage the spectrum available with defence forces, where the regulator and the WPC have failed," says a Telecom Commission member, who did not wish to be named. "We are open to debate. It is not a move that would be thrust on telecom operators or defence establishments."