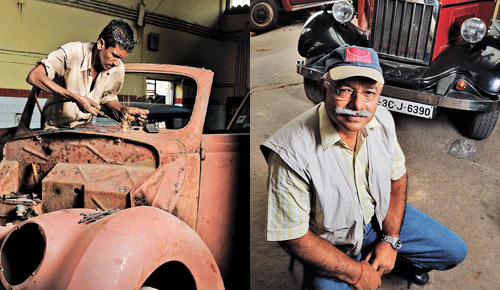 You have two choices when you want to restore a car. One, restore it to its original (factory) condition; and two, modify it to introduce modern technology. For Ravi Avalur, the choice was clear: "If you want a car with modern technology, you can always buy a brand new car, but it will lack soul." Avalur, partner and vice-president of Tecnova India, a Gurgaon-based consultancy and boutique M&A firm, is restoring a 1937 Ford V8 Phaeton that was purchased by his great-great grandmother, Gulbai Manchersha Disana, in 1937 for Rs 3,444 and 14 annas. It has been passed down through four generations along with its original purchase receipt, registration book and BMW licence plate (not the car maker! all car licence plates in the erstwhile Bombay state began with B, and Bombay city had BMW) issued before World War II. Only 3,723 of these cars were ever made and this right-hand drive version, made by Ford of Canada, is an even rarer variant.

Apart from the family ownership, there is a bit of quaint history behind what really made Avalur passionate about restoring this particular car. His grandparents, Zarine and Purviz Damry, would bring him Tintin comic books to read as a child. At the age of seven, while reading King Ottokar's Sceptre, Avalur recognised the car that Tintin uses to escape as being nearly identical to the 1937 Ford V8 Phaeton lying at the far end of his grandparent's compound in Pune. "I wanted the car to survive and decided that I would restore it one day to its pristine condition," says Avalur. Today, 30 years later, he has brought the car all the way from Pune to Delhi, and handed it over to automotive restoration expert Tutu Dhawan to do the honours.

Restoring a car to its original condition can take anywhere between six months and three years, and requires much painstaking research pertaining not only to mechanical detail but also colour, interiors, accessories and trim. "Sometimes it's just a mixture of a dead engine, flat tyres, rusty chassis and moth-eaten interiors, and we have to change it into a ‘car', a luxury car to be precise," says Dhawan. "It's a huge challenge."

Avalur is using The V8 Times and The 1937 Ford Book, both published by the Early Ford V8 Club of America, for detailed information on the car. He also hopes that the archives of The Benson Ford Research Center will yield additional information. "We are trying to salvage and repair as much of the original vehicle as possible, but where parts need to be replaced, we are using genuine Ford V8 parts," says Avalur. Some parts for the car can still be found locally and in their original packing. Other parts made from original Ford tooling can be ordered online from suppliers in the US such as Baxter's, Dennis Carpenter, and Mac and Bob Drake.
break-page-break
Another member of Avalur's tribe is Rohan Vaziralli, country manager for India at Estée Lauder, who is restoring an MGB 1971 — a sports car made by UK-based MG (Morris Garages). He inherited the car from his grandfather who bought it at a price of Rs 40,000. "My reason for originality is the passion and the joy of driving a fully restored car," says Vaziralli. "Till now I have spent Rs 5 lakh in restoration, and I expect the restoration cost to go up to Rs 8 lakh at the time of completion." He has so far brought back the hood, seats, steering wheel, gear shift and fuel tank.

The cost of restoration varies depending on the car. Unlike a Ford 1932 model, which one can pick up for Rs 2 lakh, spend about Rs 4-5 lakh and later sell at Rs 10-15 lakh, a Bentley or a Rolls-Royce can make you lighter by crores. "If a total restoration is contemplated of pre-War Rolls-Royces and Bentleys, the cost is likely to be between £150,000 (Rs 1.05 crore) and £200,000 (Rs 1.4 crore)," says Will Fiennes, managing director of UK-based Fiennes Restoration, a specialist in Rolls-Royce and Bentley restoration.

For Fiennes, restoring cars began as a hobby in 1966 when he bought his first car, a 1936 Riley. "I began to restore cars professionally in about 1975, when my involvement with Rolls-Royce and Bentley began," says Fiennes. "But the actual specialisation in restoring Rolls-Royce and Bentley started in 1978." Incidentally, the first car that his company restored professionally was a 1938 Daimler. This took about 18 months, but it was not a total restoration. His company has since restored, apart from Rolls-Royce and Bentley, several other cars, including Jaguar, Riley, Skoda, Hudson, Star, Cadillac and Sunbeam. "Forty years ago when I was doing that work, availability of spare parts and access to technical literature was much less," says Fiennes.

In India, though, the opposite holds true. "Availability of antique car parts is getting extremely difficult these days," says Dhawan. "Earlier, a lot of parts were available easily and without much hassle. Now, either we have to create the parts in our own workshop or purchase them from various online shopping sites such as Amazon.com and eBay.com." Some of the oldest car models that Dhawan has restored are the 1909 model of the Willys-Overland, 1907 model of a three-wheeler Morgan and a 1925 Rolls-Royce Phantom. The first car that he restored was a 1947 Volkswagen Beetle in the 1970s.

Here's some sweet music for those who would love to restore classic beauties but hesitate for not having a technical background. "I have not studied engineering, still I build cars," says Dhawan. "I teach youngsters to restore these marques." At present, 70-75 cars are under restoration in his workshop and he has sold more than 350 cars in the past 30 years.

However, unlike Dhawan who emphasises in having just original spare parts, another restoration expert from Delhi focuses on ‘budget antiques' (yippee!) and says that one need not have big pockets these days to restore a car. "It is a myth that only the rich can buy and restore a car," says Navinder Singh, founder of Delhi-based Ageless Classics, and a founder-member of the Heritage Motoring Club of India. "Today, you can buy an old car in, say, Rs 50,000 and restore it. One need not have the best paints in the world. There are some decent quality and low-priced automobile parts and paints available in the market, which can be effectively used in restoring a car. The aim should be to enjoy one's passion."

At times, costs can go completely out of whack. Here's why. "When a client gives us the initial brief, he sets limits or constraints," says Fiennes. "But as the work progresses, he becomes more ambitious, and it is quite common that by the end the job has expanded vastly in scope." That would, naturally, take the costs up exponentially, leading some clients to even desert their cars and making themselves scarce. Restorers have learnt to expect such situations and handle them.

"We send pictures to our customers at every stage," says Dhawan. "Everything is on record and constantly monitored and photographed. This is for the benefit of both the parties involved, so that no one can back out at the last moment. Once the car is ready, we give him a CD that contains pictures right from the beginning of the restoration till the final stage."

Now, that's what we call a photo finish!