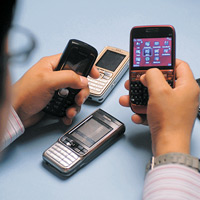 The Department of Telecommunications (DoT) has announced that India's four major metros —Delhi, Mumbai, Kolkata and Chennai — have attained 100 per cent mobile phone teledensity, which means every resident of these cities has got a cellphone connection.

Now, DoT's worry is that cellcos might use this success to seek additional
spectrum in rural areas. "The higher subscriber numbers are aimed to ask for additional spectrum at lower cost, maybe even free, in the name of increasing teledensity, now in rural areas," says a DoT official.

DoT's numbers are based on the data submitted by the operators; the catch is, a person with more than one connection is not counted as one subscriber but many.

"The error in subscriber calculations was once more than 20 per cent, while there is no acceptable norm set by the government for such an error," says D.P.S. Seth, former member of Trai (Telecom Regulatory Authority of India).

If another round of subscriber-linked criteria is on the cards, it will be a retrograde step.