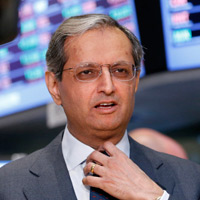 The announcement was made on 16 October in a statement from chairman Michael O'Neill. Michael Corbat, previously chief executive for Europe, West Asia and Africa, was named to replace Pandit, the statement said.

The development comes a day after the India born CEO-led US banking giant reported 88 per cent plunge in net profit at $468 million in the July-September quarter.

Nagpur-born Columbia University graduate Pandit, 55, had been the CEO of Citigroup since December, 2007.

Pandit said Citigroup has emerged from the financial crisis as a strong institution and "now is the right time for someone else to take the helm at Citigroup."

"Thanks to the dedication and sacrifice of people across Citigroup, we have emerged from the financial crisis as a strong institution. Citigroup is well-positioned for continued profitability and growth, having refocused the franchise on the basics of banking.

"Given the progress we have made in the last few years, I have concluded that now is the right time for someone else to take the helm at Citigroup," Pandit said in a statement.

He added that he is leaving the company in better hands.

Corbat is the "right person" to tackle the difficult challenges ahead, with a 29-year record of achievement and leadership at this Company, he said.

"I will truly miss the wonderful people throughout this organisation. But I know that together with Mike, they will continue to build on the progress we have made," he added.

Facing The Financial Crisis
Chairman of the Citi board Michael O'Neill praised Pandit's efforts in steering the company through the tough financial crisis.

Pandit had taken over at the helm of Citigroup at the start of the financial crisis. In 2009 and 2010, as Pandit struggled to pull the bank back from the brink of the crisis, he accepted only a $1 annual salary.

"We respect Vikram's decision. Since his appointment at the start of the financial crisis until the present time, Vikram has restructured and recapitalised the company, strengthened our global franchise and re-focused the business," O'Neill said.

He added that the Board is grateful to Pandit for his "leadership, integrity and resilience" in guiding Citi through the crisis and positioning it well for the future.

"We wish him all the best with the next stage in his career," Corbat said, expressing his appreciation to Pandit for his work and achievements at Citi.

"Without his leadership, Citigroup would not be so well positioned globally to tackle the challenges and opportunities ahead of us," he said.

High-Profile Defeats
Pandit's departure follows a series of high-profile defeats this year. In March, the Federal Reserve rejected Citigroup's capital plans after a stress test. Pandit had led analysts and investors to believe the dividend-raising plans would be approved.

Just last month, Pandit agreed to a low sale price for his bank's stake in the brokerage operated by Morgan Stanley. Citigroup took a $4.7 billion charge in the third quarter to write down the value of that stake.

Experience Questions
Pandit's resignation revived questions that were asked from the day he took the job: whether he had the right experience to lead Citigroup in the first place.

Born in Nagpur, India, the 55-year-old Pandit obtained two electrical engineering degrees and a doctorate in finance from Columbia University. He joined Citigroup in July 2007 when the bank acquired his hedge fund and private equity firm, Old Lane Partners LP, for $800 million. Citigroup had to shut down Old Lane the next summer, an early black mark for the executive.

Critics later charged that Pandit was too timid, perhaps even too academic, to run a big consumer bank.

"He was not beloved by Wall Street. He was thrust into that position - he's a hedge fund guy," McCormick said.

His successor, Corbat, has held a number of senior roles at Citigroup, including running Citi Holdings, the unit established to house businesses and assets the company wants to shed.

A fixed income salesman by training, Corbat started out at Solomon Brothers in 1983. More recently, he has been credited with successfully restructuring some of Citigroup's consumer and credit card units.

Timing Of Departure Questioned
Investors questioned why Pandit would leave now after keeping the bank afloat during the financial crisis and getting it back on a firmer footing.

Citigroup shares fell 2.4 per cent to $35.77 in premarket trading Tuesday. The shares rose sharply on Monday after the bank reported quarterly results that were much better than analysts expected.

"It does seem strange to me that someone would step away after reporting better-than-expected numbers and certainly do a lot to reconfigure the company for going forward. I would have expected he wanted to stay around and see some of the fruits of his labors there."