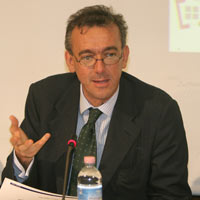 08 November, 2014
Print this article Font size -16+
Italy's Finmeccanica promoted company insider Alessandro Pansa to run the defence group as CEO after the arrest of its head for alleged bribery led India to suspend a $750-million deal to buy helicopters.

After a hastily convened board meeting in Rome, Finmeccanica said Pansa, the chief operating officer, would step up to ensure management continuity following the arrest in northern Italy on Tuesday of chairman and chief executive Giuseppe Orsi.

Orsi, who is being held in jail but has not been charged, faces allegations he paid bribes to win a 560-million euro contract for the company's AgustaWestland unit to supply 12 helicopters for use by senior Indian officials.

Orsi denies any wrongdoing; but the company in its statement said Pansa, 50, would take on "the powers and duties previously held by" him. Pansa will have the titles of COO and CEO and ensure "comprehensive management of the company and the group".

The case is having a political impact in both Rome and New Delhi. It is the latest in a series of scandals to shake the Italian business community ahead of an election in 10 days.

In India, national elections are not due until next year but the opposition Bharatiya Janata Party (BJP) has attacked the Congress-led government for not acting sooner over allegations of bribery.

India will make no more payments nor take delivery of the remaining nine helicopters until a probe by its Central Bureau of Investigation (CBI) is complete, two officials at India's Defence Ministry told Reuters on Wednesday.

"India decides to put on hold the delivery of helicopters," one of the sources said, adding that the suspension would remain until the CBI completed its inquiry. When asked about payment, the official said: "Payment as well."

In Italy, former Prime Minister Silvio Berlusconi, leading the centre-right's largest party into the parliamentary election on February 24 and 25, said the arrest of Orsi would harm Italy's struggling economy and suggested that investigators were putting the country at a competitive disadvantage.

"Finmeccanica acts just like the rest of its international competitors, with the difference that magistrates elsewhere do no react the same as in Italy," the billionaire businessman told a television interviewer. Berlusconi himself has fought a series of legal battles over his commercial affairs and private life.

Pansa Promotion
The promotion of the COO to take over from Orsi had been expected at Finmeccanica, 32-per cent owned by the Italian state. Pansa, who joined Italy's second largest corporate employer in 2001 as chief financial officer, will be supported by Guido Venturoni, a former admiral who becomes vice chairman.

Venturoni was the senior independent director on the Finmeccanica board. The company said shareholder meetings would be held in April to finalise the new board.

Pansa faces the challenge of managing the fallout from the Indian crisis and pressing ahead with asset sales.

The heavily indebted group is seeking to sell units including its AnsaldoEnergia power engineering business to focus on its core aerospace and defence activities and avoid more credit rating downgrades.

Investors are concerned the replacement of Orsi, who was appreciated for his market-friendly style, could disrupt the company's turnaround ambitions.

On Tuesday Fitch put Finmeccanica's rating under review for a possible downgrade saying the arrest raised risks of "material disruption".

Standard & Poor's already cut Finmeccanica to junk in January after the group missed its target for 1 billion euros of asset sales by the end of 2012.

Analysts said another downgrade to junk could impact the group's ability to receive pre-payments from customers and harm its competitiveness outside Italy.

Concerns over possible negative developments in India weighed on Finmeccanica shares, which fell 4 per cent to 4.23 euros to their lowest level since mid-December. Finmeccanica bonds were also under pressure with the yield on a 2015 bond rising to about 5.49 per cent from 5.29 on Tuesday. (Additional reporting by Danilo Masoni in Milan and Nigam Prusty in New Delhi; Writing by Keith Weir in Milan; Editing by Alastair Macdonald)