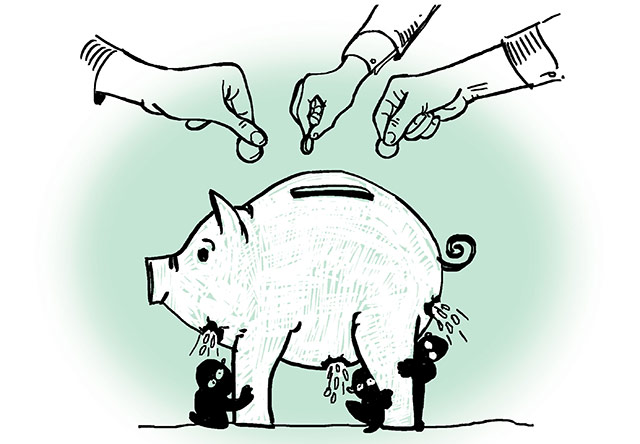 16 April, 2015
Print this article Font size -16+
TS. Sivaramakrishnan, secretary of All India Association of Chit Funds, spends more time these days telling people the difference between genuine chit funds and ponzi schemes. And he has personal reasons to do so.

“Managing a chit fund is seen as a bad profession now; people look at you with a lot of suspicion. It can bring a bad name to your family… these are times when no one would even want to have matrimonial ties with people engaged with chit fund business,” laments Sivaramakrishnan, who also manages the Balussery Benefit Chit Fund.

Ponzi investment schemes such as Saradha and the infamous Rose Valley Fund have rocked the foundation of the chit fund industry. These scams have caused an identity crisis for Indian chit fund companies — some of which have been in existence for over seven decades. Although investor base of chit funds is growing in India, there is an increasing skepticism among ‘new-gen’ patrons towards this indigenous savings product. “There has been a lot of confusion over chit funds in the last three years... Partially this is because of mis-reporting by the media, which feels all chit funds are ponzi schemes. This is simply not true,” explains S. Bapu, executive advisor to Shriram Group, which runs the Shriram Chit Funds.

Proliferation of unregistered chit funds is another big problem faced by the industry. Finance companies prefer to float unregistered chit schemes as it saves them from stringent regulatory mandates, cumbersome filings and tax obligations.

To make matters worse, the union government recently brought chit funds under the service tax regime; this levy, charged indirectly on investors, will hurt the return profile of most chit funds.

Chit Basics
A chit fund is both a credit and savings product. Chit schemes bear a pre-determined value and are of a fixed duration. Each scheme admits a particular number of members (generally equal to the duration of the scheme), who contribute a certain sum every month to the ‘pot’. The ‘pot’ is then auctioned every month. One with the lowest bid gets the pot. The borrower continues his contribution till the end of term.

Most chits do not allow bids in the first round of instalment, but to simplify the example, let’s assume A’s chit fund manager (also known as foreman) allows draw from the first pot. To get the pot (Rs 50,000), A has to bid alongside other contributing members of the fund who too might be interested in the pot. If A manages to out-bid others — at say Rs 49,000 — he gets to keep the money. For the remaining months (till tenure), A will have to continue paying his subscription fees of 1,000.

Here’s how the math would look at the end of the term: A pays Rs 50,000, but gets only 49,000 (out of his successful first pot bid). The Rs 1,000 that he forgoes (at the bid) is divided among other members of the chit fund, which is their profit or dividend. A benefits from the timely receipt of funds; he also gets dividends if other members borrow from the ‘pot’ in subsequent months. Members who do not borrow from the ‘pot’ generally make 9-12 per cent returns on their investments.

The ‘pot’ value could be between Rs 1 lakh and Rs 5 crore; and the tenure of high-value chits could go up to a decade. The smart thing to do is to invest in chit funds that have a higher bidder turnout. Discounts could be steep in funds with more bidders, and this could incre-ase the dividend payout. (Excerpts paraphrased from a BW story published in June 2013).

“Chit funds are more flexible than banks. They require less documentation and are more accommodative of different types of collaterals (at the time of joining the fund). The biggest plus-point is that chit funds allow members to access cash whenever necessary,” says V. C. Praveen, director at Chennai-based Sri Gokulam Chit & Finance.

Cheat VS Chit
Chit funds, which mostly cater to small savers and traders, are lately linked to almost every investment scam in the country. The industry is seen with a lot of suspicion in the aftermath of the collapse of Saradha Group (in April 2013), which wiped out the savings of thousands of investors. The Rose Valley Scam and the KBC Chit Fund scam tarnished the image of chit funds even further.

“Saradha and Rose Valley were collecting public deposits and investing the money in real estate. They were promising super-normal returns to investors. Chit funds do not engage in such activities. The pot is always in the bank; it is not re-invested,” clarifies Sivaramakrishnan.

Chit funds are not allowed to do any other business without the permission of the state government. Chit fund association members, however, acknowledge that there are many unregistered chit funds, which could be diverting funds for making dubious investments. As per industry estimates, over 12,000 registered chit funds manage Rs 35,000 crore every year. The share of unregistered funds may be 80-90 times that of registered funds, association members opine.

“It is very important to differentiate between chit funds and ‘collective investment schemes’ (or ‘ponzi’ schemes). The latter is not regulated by the government and hence, unsafe,” says Preethi Rao, policy and development fellow at IFMR, which has done extensive research on chit funds.

“Investors should look for chit fund companies that are registered under the Chit Fund Act, 1982 and have been around for many years. Apart from checking company registration, it is also important to check whether the scheme (one is participating in) is also registered,” advises Rao.

The chit foremen too have to be registered with the registrar under various state governments. They then have to get separate approvals for different chit schemes. They also have to submit the collection and auction procedure reports periodically, and deposit security — equivalent to the chit amount as cash or bank guarantee — with authorities specified by the respective state governments. The chit company will not be allowed to withdraw this collateral till all participants have been paid. Such regulations make chit funds safer, but also costly.

Service Tax Worries
The government has decided to impose service tax (at 14 per cent across services) on firms  running chit funds. This is likely to have an impact on net earnings from chit funds.

“The chit promoter is not in a position to take the burden on his shoulder as this industry is subject to a cap on its income, which is a wafer thin 5 per cent for the entire period of service, which go up to 60 months,” says Sivaramakrishnan. “This will also lead to the burgeoning of unregistered chit fund schemes,” warns Praveen.

Bottom Line
Limitations apart, chit funds address gaps left by the traditional banking sector. They mobilise individuals into small groups to save among themselves. The popularity of unregistered chit funds in villages and towns is a standing testimony to this fact.

“Registered chit funds are quite safe for small investors as there are strict guidelines for registered companies to follow. The primary problem faced by chit funds in recent times is bad press. The media has erroneously blamed the registered chit industry for the scam perpetrated by collective investment scheme operators,” says Rao of IFMR.

“The need of the hour is to educate the public about the safety of the registered chit funds since they play a major role in the financial inclusion agenda of the country,” she says.

The time is just right to distinguish between chit funds and cheat funds.