Chink In The Sebi Armour 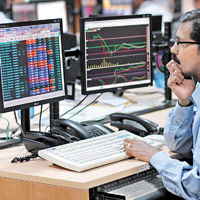 08 November, 2014
Print this article Font size -16+
The Securities and Exchange Board of India (Sebi) needs to update definitions in its rule book. On 9 November, the Securities Appellate Tribunal (SAT) set aside a Sebi order penalising three individuals for alleged front-running — an unethical practice of a brokerage firm trading securities ahead of executing a large client order that could significantly change the price of a stock. SAT said only firms can be charged with front-running, not individuals.
Sebi had barred Dipak Patel, a portfolio manager with institutional investor Passport India Investments (Mauritius), and his two cousins from dealing in securities, and imposed a fine of Rs 11 crore on them. Patel allegedly tipped off his cousins about the orders he was about to place on behalf of Passport India between 2007 and 2009. Trading records indicate that around 600 trades (amounting to Rs 1.56 crore) were executed by the cousins seconds before the firm’s orders were placed, the regulator said.
The SAT order is based on the Prohibition of Fraudulent and Unfair Trade Practices regulations. It said, “It is an admitted position by both sides that the aforesaid clause applies only to intermediaries and not to other persons trading in the securities market.”
Former Sebi executive director Sandeep Parekh says the order is surprising, because a portfolio manager also ought to be covered by the definition of ‘intermediary’ under Sebi’s laws. What the analysts seem to agree on is that Sebi, if needed, should amend the law to capture even non-intermediaries. In May, Sebi had decided to bar cases of front-running from being settled through consent.
Says Sanjay Israni, partner at law firm Rajani Associates, “A dearth in a specific provision of the law as observed by SAT may also dilute the provisions of Sebi’s May circular” that set front-running on a par with insider trading. A similar benchmark is also followed in the US.
The US securities regulator, Financial Industry Regulatory Authority (Finra), recently enlarged the scope of its front-running laws beyond equities. Market observers say that even in India, the derivatives market has been used for front-running and, perhaps, it is time to take a leaf out of Finra’s book.